Home Music Joseph Daley: A New Perspective on The Seven Heavenly Virtues | The...

Black composers, poets, choreographers and filmmakers have never got the recognition they deserve – not publicly and the way white artists doing the same thing do. Do biographies of Scott Joplin, W.C Handy, Duke Ellington, Charles Mingus, Wynton Marsalis, Anthony Braxton and others mentioned in compendia of “Great Composers”? Likewise for black artists in different disciplines… It’s so much more galling and we must take so much more umbrage when the (black) artist in question creates a work of considerable length. We might recall, ,if prodded, for instance, The Ellington Suites (some of them), but can anyone recall in a blink Mr Mingus’ Epitaph or Mr Braxton’s Trillium – as they would Beethoven’s 3rd 5th and 9th? The former is a testament to the triumph of the black human spirit over adversity – enormous adversity, “sung” in the voice of an eminent black artist. And everything that Mr Braxton writes comes from someone who has grown out of the blues and into the world and ought to be viewed alongside works by Stockhausen – to say the least. 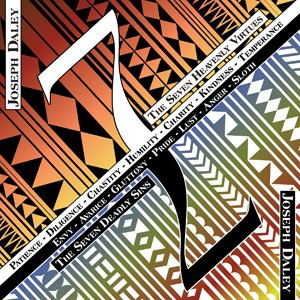 Joseph Daley wrote two major works and recorded them in all their grandeur. The Seven Deadly Sins was recorded in 2010 by the Joseph Daley Earth Tones Ensemble and The Seven Heavenly Virtues followed in 2013. Seven and ten years have followed since then and now Mr Daley has released both to very little attention, much less public fanfare – yet again. How much does a black artist have to do to make his work – stupendous works like these by Mr Daley – get the attention it deserves? Both are large scale works – the former performed by a large 24-musician-strong chamber string ensemble with orchestral strings and percussion and the latter by a large, 27-musician ensemble comprising woodwinds, brass and expended rhythm components.

Mr Daley is a tubist and euphonium player. But he is also a composer with a heightened sense of human issues. He is black and so, naturally, most aware of the struggles of black people in the US, where he has been born and raised. How odd – and tragic – that someone born and raised in the US must yet have to be qualified as black if only to have his music listened to and his voice heard a full 400-plus years after the black man first stepped foot on the continent? How tragic, yet – unfortunately – necessary, even the civic-minded sociologists might say. But if the modern day colonial refuses to die, tribalism will also likely stay alive.

And yet the beauty of these works by Mr Daley transcends human barriers. Both are spiritually deep and examine the nature of conscience. Surely this is something that every human being wrestles with – irrespective of what colour his skin is. Mr Daley’s music deserves wider recognition not only for the importance of its scope and content, but also for its musicality. This bears reiteration and so I reproduce reviews of both recordings; the first from 20th December, 2013 and the second – The Seven Deadly Sins from 3rd April, 2011, published in www.allaboutjazz.com. Both works are now available on one disc and remain essential listening for anyone interested in large scale compositions that transcend human barriers: