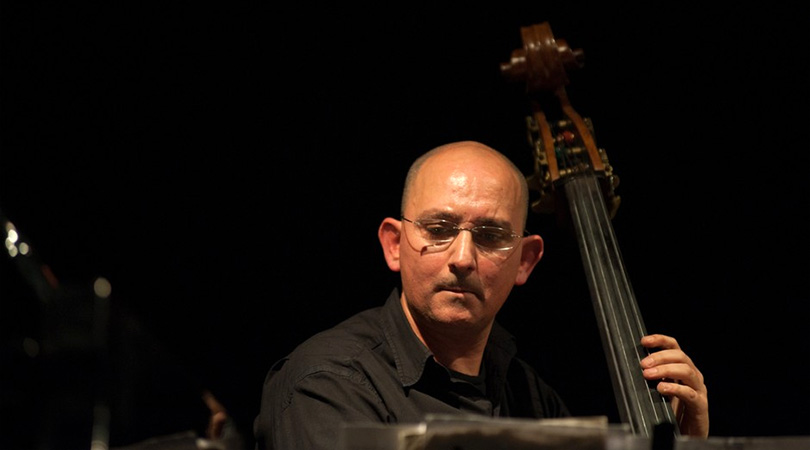 The concept, or idea – if you like – that resulted in this solo sojourn on the contrabass by Miguel Ângelo, has to do with raising the bar on the nature of achievement and the satiation that comes with it. Depending on the intensity it might have taken to reach a high-point, that could mean decompression or, as is the case here, reaching for something eminently more “unreachable”. Judging by the brilliance of this improvised music, including many ingenious bassline melodies played con arco or pizzicato, this album not only achieves what it has set out to do, but exceeds that in spades.

The contrabass has always been a lonely instrument in ensembles from small ensembles to chamber groups and, of course, symphony orchestras. But the legendary figure of Jimmy Blanton brought it of the shadows in the Duke Ellington Orchestra and thrust it into the spotlight with his magnificent sinuous soloing. Other figures such as Oscar Pettiford, Ray Brown, Scott LaFaro and Niels-Henning Ørsted Pedersen raised the level of contrabass playing to an infinitely higher level while Charles Mingus took it to a rarefied realm. Although not common, several bassists have taken a leap of faith and made solo recordings – such as the noteworthy live one by Charnett Moffett (Motema, 2017) where the great bassists took enormous risks. And now there is this one by Miguel Ângelo, one of the leading bassists from Portugal (another being Theo Pascal, who lives in London).

Mr Ângelo plays a magnificent instrument on I Think I’m Going to Eat Dessert and the quality of his playing is stupendous. His tone is luminous, and his phrasing distinguished. His articulation is crisp and forthright, and this permeates into all the music. From the central work of this album, its “Meditations”, and the central movement’s out-of-phase pizzicato repeated notes that sound like a mechanical instrument gone wrong, to the mad outbursts – the presto, furioso, brutale, tumultuoso passagework in the faster sequences and the fluid, dissolving textures of the outer, movement 3. The album ends appropriately with the most upbeat and vividly energetic work “Children’s Playground”, a work sustained by flickering pizzicato underpinned by delicate, sustained octaves.

As a composer and improviser Mr Ângelo shows himself as an insightful musician who teases out the dense rhetoric from pure music. This coupled with all the virtuoso aspects of his playing make this album a memorable one both in terms of ideas and just plain brilliant bass playing.