Michael Gregory Jackson is both one of the most prodigiously-gifted – albeit relatively unsung – guitarists of all time and a great improviser and composer of any era spanning at least the last fifty years. His exceptional output either as a guitarist especially with Wadada Leo Smith and members of the Association for the Advancement of Creative Music, and his self-penned miniatures is almost legendary and relative periods of woodshedding and musical quietude may have contributed to this. But every time he breaks out of this comparative silence his mastery as a virtuoso guitarist with one of the most unique voices in music and his consummate skill as a composer and arranger can be savoured on his studio and stage performances. 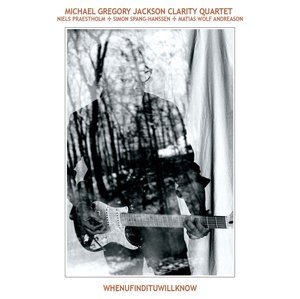 In this instance the very extraordinarily entitled album WHENYOUFINDITYOUWILLKNOW is one of the finest examples of what Mr Jackson is best known for: virtuosity and singular musical genius. Performing with his Clarity Quartet, a group of Danish musicians including one of the finest bassists on the planet, Niels Praestholm, Mr Jackson breaks out with some of the most bewitching repertoire he has ever produced. There’s poise and elegance in these pieces, many of which are dedicatory. Naturally the music will evoke the music of its dedicatees in character and suggestion, but the overriding voice here is Mr Jackson’s unique one, which is drenched in the aura of (and by his own admission) some parts Jimi Hendrix, Wes Montgomery, Son House, Igor Stravinsky, John Coltrane and a large part pure Michael Gregory Jackson.

Each piece is a gleaming gem, polished by Mr Jackson – leading the rest of the quartet – into a memorable and impressive melodic, harmonic and rhythmic journey. From the exquisite and baleful “Theme X” (dedicated to the incomparable Geri Allen) to the emotionally eloquent “Clarity 6” (dedicated to Fred Hopkins) and the mesmerising “Spin” (dedicated to Baikida Carroll), the forlorn “Blue Blue” (dedicated to Bruce Kevin Jackson), the touchingly elegiac “Souvenirs” (dedicated to Jessica Hagedorn) and the profundity of “Meditation in E” (dedicated to Karen), Mr Gregory and the Clarity Quartet weave their way through an emotionally intense set of music.

Through it all Mr Gregory lays down the law displaying artistry that even with his dazzling technique, and without ever selling the emotional intensity of the music, he never overshadows his colleagues, who in turn realise every colour and expressive import of their parts. Mr Praestholm with his dark and growling rumblings, drummer Matias Wolf Andreason with his percussion tonal colours culled from an exhaustive palette and saxophonist Simon Spang-Hanssen who brings to this music his special clear-focused zeal to the complex and often diabolical contrapuntal harmonies. And always there is the magical guitar wizardry of Mr Jackson propelling the music to the rarefied realm with inspired phrasing and wondrously imaginative ornamentation in every solo flight.

Altogether this is an album to absolutely die for…