It’s clear from the music on Mothership that Dwight Trible is at the height of his powers. For combined tonal purity, shimmering intonation and phrasal intuitiveness he seems to have no equal among anyone singing today and few who have ever sang a song. Blending gravitas and invention his music is at times evocative of the great spirituality of Paul Robeson and the seduction of Nat Cole. As for suggestions of the latter, however, Mr Trible intones his lyrical poetry replacing the velvet fog of Mr Cole with the vocalastics that seem to glide in the dark, scimitar-sharp as they elevate his art to a rarefied realm.

With Mr Trible at the helm of his proverbial Mothership you will find the vocalist giving a characteristic account of musical art that is at the heart of a kind of renaissance of Black consciousness. Not surprisingly, therefore you will find the brilliant young tenor saxophonist Kamasi Washington making an appearance with Mr Trible on the atmospheric music of “Mothership”. If Mr Washington interweaves 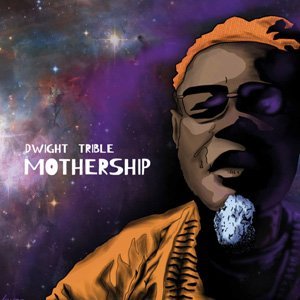 a mighty and moving thread through the fabric of the song with Mr Trible, the heavy-lifting is done by a magnificent rhythm section that includes pianist Mark de Clive-Lowe, the visceral playing of contrabassist John B. Williams and the thunderous and artful drumming of Ramses Rodriguez.

The lyricism of the music and its poetry also speaks in a special way to Mr Trible and he responds with a kind of apocalyptic zeal. He is captivating throughout the repertoire reminding us – especially on “Donny Hathaway’s beautiful blues: “Thank You Master” – that this is music that comes from a great depth. As if in response Mr Trible takes this cue and soars to a heavenly realm almost immediately on “Desert Fairy Princess”. Most appropriately he is joined on this musical sojourn by the ethereally beautiful harp of Maia and violist Miguel Atwood Ferguson, who is eloquent throughout. Elsewhere on the disc, Mr Trible’s rhythm section is also fortified by percussion colourists Derf Reklaw and Carlos Niño, both of whom are – predictably – utterly impressive.

This is a uniquely thoughtful performance of repertoire that seems made for the singular artistry of one of the most prodigiously gifted musicians in vocal Jazz. The sense of awe and wonder that hovers over the complete recital is palpable and is particularly close-focused on songs such as “Mothership”, “Standing in The Need of Prayer”, “Mother”, “Brother Where Are You?”, “Thank You Master” and, of course, Mr Trible’s own “Walkin’ To Paradise”. Meanwhile on Mr Ferguson’s viola playing is the ever-shifting heartbeat behind the wonderfully supple expressive contours of Mr Trible’s first voice eloquently tracing the contours and then extrapolating on the melody of “Some Other Time”; a dreamy and hypnotic song with which to close this album to absolutely die for…