Writing about music I struggle, always, with rendering the imagery of the music into a language of consonants, vowels, diphthongs and so on. It is a challenge I lose more often than I win. It is clear that I am likely to lose once again. After all this is the music of Maya Beiser and the record in question is tranceclassical. It is one of the most impossibly beautiful performances by a modern cellist in a very, very long time. To make music such as Beiser does on this record, she must almost cease to be present in the music; to let it go as it were part of a titanic struggle to escape into an alternate universe. 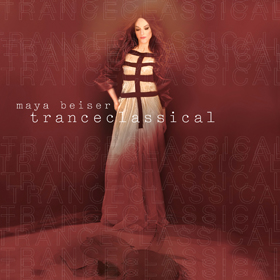 Throughout the performance Maya Beiser reminds us that a musician belongs to music (and not the other way around). And as the art that Beiser practices to such perfection, an art almost as elusive as the Muse that begets it, makes its way into that rarefied realm, she pursues it in a childlike state of wonder. And so to truly ‘hear’ the music the way Beiser demands that it should be heard, you, as listener, must also make that risky journey with her. You realise almost immediately – right from the first notes of Bach’s ‘Air’ – that you are undertaking a sorjourn from which you will never return the same person as when you left. With good reason…

To begin this programme with Bach is unutterably diabolical because it is as if you were being lulled into the otherworldly sleep of kings. It’s almost like being in several Stanley Kubrick films all at once. And there’s no arriving back in the same form in which you departed. If you crank up the volume – as I did – after the first track, listening to Michael Gordon’s ‘All Vows’ which has been transformed by Beiser into a re-imagined Kol Nidrei, the Yom Kippur prayer, then you’ll begin to realise there is no use resisting. Beiser tears the membranes of the brain, reassembling them her own way, especially after this track. It’s the only way that you can prepare for what is to come, of course.

And here’s where the struggle to relocate this music into the landscape of words, phrases and even complete sentences feels like a losing battle. Channelling her voice through its ethereal superimposition upon her cello that groans with the keening scream of bow on strings, as it is pushed to outermost limits of aural possibility, Beiser brings back memories of Kennedy and his own beautiful torture of the violin when he is on song. You will also hear Imogen Heap (‘Hide and Seek’) as you will never hear her ever again. Lou Reed (‘Heroin’) is expressed in the voice of an addict in the throes of an overdose. And on, and on…

Everything – and nothing – makes sense as you journey through the music of Mohammed Fairouz, Glenn Kotche, Julia Wolfe and David T. Little. And then time stops as Maya Beiser’s performance reaches the point of no return: Hildegaard von Bingen’s ‘O Virtus Sapientae’ as you have never heard it before, or will ever hear it again. Maya Beiser, her cello and her music has reached terminal velocity and so have you.