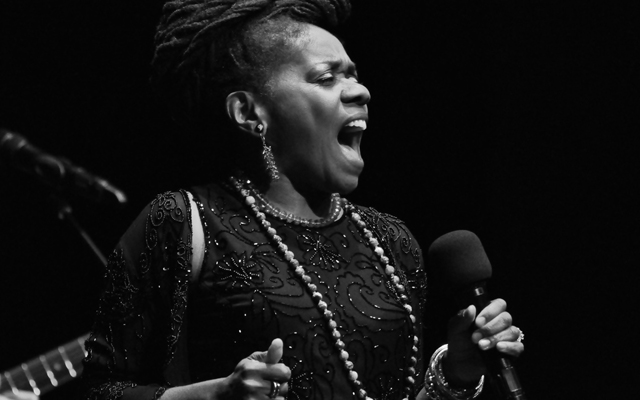 Every record that Catherine Russell makes – live or in the studio – is like undertaking a profound journey into the beating heart of Jazz. Remarkably she is as vividly present on her studio recordings as she is in live performances. Not many artists have this magical ability; Sheila Jordan is perhaps the only living artist that is likewise enchanted. Russell is in the same realm as Jordan not only for her ability to sound as if she were singing in the same room as you; they are both prescient storytellers – Jordan’s book begins with Charlie Parker, then ventures onward and Russell begins her narrative is contained in the blues and in the vaporizing heat of early Jazz to the American Songbook; Louis Armstrong, Luis Russell and Sidney Bechet, New Orleans to nocturnal New York. 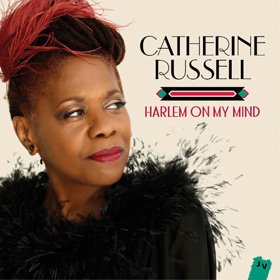 Catherine Russell stands out in Harlem On My Mind the eloquent reserve of its title song, which leads the listener on by the ear, like a lover by the necktie, through the entire programme which stands out in the balletic grace, the relaxed propulsion and playful conversational ease of her vocal phrasing. Far from standing back and letting the music do the talking, Russell enters directly into its secrets, singing with wicked humor in ‘Harlem On My Mind’ and with blushing loveliness in ‘I Can’t Believe That You’re In Love With Me’. She cuts a rug with ‘Swing! Brother, Swing!’, is amorous and physical in ‘You’re My Thrill’, aching and melancholic like a star-crossed lover in ‘’Let Me Be The First To Know’. Through it all, she is, of course Catherine Russell, aristocratic, imperious, and in complete control as she brings music, to life with thrilling surprise.

A vocalist is only as good as the ensemble that carries her on a musical palanquin. As always, Catherine Russell is backed by a magnificent group of musicians, from the crisp attack of Matt Munisteri’s guitar and banjo, to the suggestive elegance of Mark Shan’s pianism. The young Canadian drummer, Mark McLean plays like a percussion colourist and bassist Tal Ronen growls often, often like an absent tuba. Andy Farber, Mike Lopeman, Fred Staton and Alfonso Horne are all brilliant, to a man. The ensemble is held to its highest standard by the charismatic Jon-Erik Kellso and John Allred. But it is Dan Block who takes your breath away with his complete command of the alchemy of the tenor saxophone and the magical clarinet creating lines that capture the music’s elemental swing and tenderness on both instruments. But make no mistake, this is Catherine Russell’s record and she doesn’t miss a beat as she basks in the splendour of the music.

Track List: Harlem On My Mind; I Can’t Believe That You’re In Love With Me; Swing! Brother, Swing! The Very Thought Of You; You’ve Got The Right Key But The Wrong Keyhole; Don’t Take Your Love From Me; Blue Turning Grey Over You; You’re My Thrill; I Want A Man; When The Lights Are Low; Talk To Me, Talk To Me; Let Me Be The First To Know.