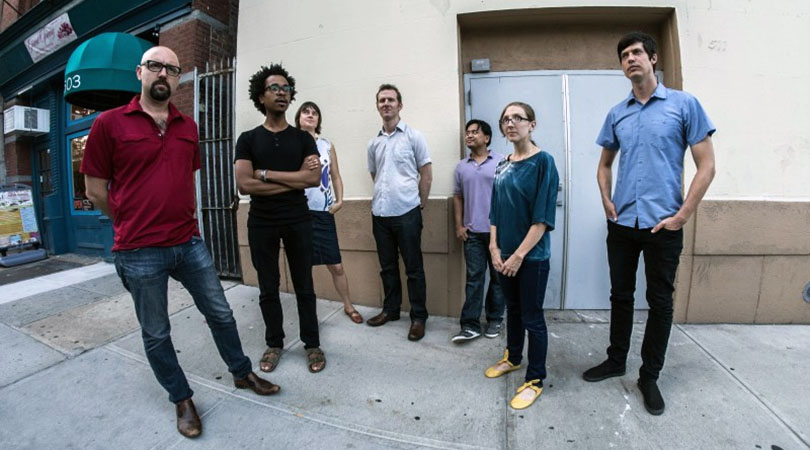 Mary Halvorson’s music on her remarkable recording Illusionary Sea is multi-faceted; cut like a diamond refracting the musical notes themselves; but it is also visual and narrative as well. Best of all it is wrapped in imagery that is unabashedly concrete and this is wonderful because virtuosity such as is possessed by Ms. Halvorson might lead to a touch of romanticism. However, the guitarist eschews flash and pomp and circumstance, focussing rather on a lean and sinewy kind of image that is singularly beautiful and sometimes quite vocal, and aria-like. On this recording, Ms. Halvorson cuts to the quick, soloing rarely, yet making her statements loud and clear through the intricately woven sound of her septet. What is interesting here is that the titles of the songs are rather visual, but when it comes time to lay out the chart, the music becomes strongly narrative. But because the narratives are wryly suggested, almost impressionistic and tremendously colourful in tone, they turn into pictograms; which is not unlike what a Japanese calligrapher might do. Consider “Smiles of Great Men,” or “Red Sky Still Sea” and the title of the album itself… and an idea begins to form in the mind’s eye and ear.

Ms. Halvorson is one of the brightest and most forward-thinking musician. This should come as no surprise. She associates with men like Anthony Braxton and Taylor Ho Bynum, both of whom are in the leading edge of musical development. There is also ample evidence in her spare playing that she might have listened to John Cage and modern minimalists such as Karlheinz Stockhausen. Which modern musician can really claim to not have been influenced by both? Or even Mr. Braxton? However, Mary Halvorson is a brave and singular soul. Her sharp tone and the slanted, sliver-like notes that she squeezes out of her electric guitar suggest that they also have a certain spectral quality to them. It is no accident, for instance that one of her songs is entitled “Fourth Dimensional Confession (No. 41)”. While this might suggest spiritualism, the guitarist has a novel way of going there. Jonathan Finlayson’s trumpet and Jacob Garchik’s trombone may suggest that there is an air of soul-searching as they introduce the song, but then it develops quickly into a beautiful, intrusive journey into that spectral dimension that the guitarist often courts. Incidentally, Mr. Findlayson plays magnificently and contrapuntally across the bandleader’s ululating guitar and John Hébert’s muscular bass.

This is a group of musicians who can play music that is modern and complex and, of course, much of that credit must first go to Mary Halvorson, who conceives of it all; then drives the septet into uncharted territory. Then there is the elasticity with which the music is played—mostly in ensemble. However, during the short and absorbing soli the music makes dramatic twists and turns, constantly surprising the listener with how and where harmonies might take a melody and how and with what extraordinary skill a musician might follow there. But then these are musicians from the interstellar regions of music and this is a record made with immense ingenuity. As a result it is utterly brilliant and memorable.