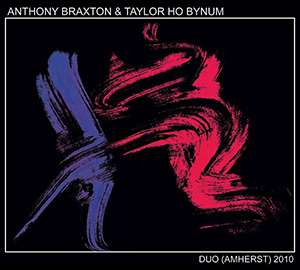 It is difficult not to listen to Anthony Braxton and not feel like falling through a time warp, for more than Pharoah Sanders; more than Wayne Shorter or any other musician playing today the image of Father Time—or more appropriately and somewhat conversely Mr. Braxton with all his lyrical erudition could easily be recognised as the Bard of Timelessness. The co-mingling of reeds and brass at the hands of the inimitable Taylor Ho Bynum, on this ineffably beautiful recording, Duo (Amherst) 2010 provides an unexpurgated lesson in the history of contemporary music, where tradition is paid respect to in an exquisitely secret and spectral manner; where swing is swung polyrhythm is stripped down to its very pulse—its heartbeat—and harmonic inventions are put through their paces with contrapuntal conversations that entwine and dance around each other like a proverbial double helix forming as it energises the air around the soundstage to such an extent that metaphor and genres melt away to reveal pure music—the music of singular voices and poetics imbued in the music colliding to make a dazzling sonic poetry as only Mr. Braxton and Taylor Ho Bynum.

Two years after the recording and production of the live concert captured live on September 22, 2010 at the Bezanson Recital Hall at the University of Massachusetts, the music sounds fresh and—thanks to the production of a DVD—comes alive with each new viewing of the concert. There is also the fact that this music by Mr. Braxton and Mr. Bynum is molten and forever in motion like a mobile by Alexander Calder; and more than that it is multi-dimensional and has a spectral dimension to it and has many layers of meaning that are revealed in the unveiling of the textures and timbres of each of the instruments employed in the compositions. The skittering yowl of the alto saxophone and the yammering of Mr. Bynum’s bevvy of pocket brass as the two musicians chase each other in “Composition 364f” is sometimes reminiscent of Nicolai Rimsky-Korsakov’s “Flight of the Bumble Bee,” but only just; then the music dives into another realm, full of uncertainty in “Composition 367h”. Silences are more pronounced; Mr. Braxton also varies the pitch and the timbres as he switches from alto saxophone to sopranino, soprano and baritone saxophones. Taylor Ho Bynum is no different and equally venturesome as he makes adjustments in his own adventure into the polyphonic territory—switching from flugelhorn to pocket cornet and piccolo trumpet. “Grade, and Shift” is another matter altogether. Here it appears that music finds repose as the music’s dramaturgy unfolds. There is a significant cooling down of the heated exegesis of the polyrhythmic and polyphonic writing of “Composition 364f”and of “Composition 367h” and Mr. Bynum guides the duo into the dénouement of the short narrative.

“Composition 363a” and “Composition 366j” feature dramatic inversions of featured texts from the first set. But there is more. The musicians, considerably warmer from the energy of the first set seem to make more of sounds and silences in these compositions. More than the necessity of taking time to change instruments in order to reach a different plane in terms of timbre, the blowing is more subtle; almost as if here was an attempt at broadening the palette of colours. There was also a discernable thickening of textures, thereby increasing the density of the music. Once again lines between genres were burned and melted to reveal music of the highest order, which was completely new and original in nature. Once again time and space was melted away, but only this time a surrealist image of molten clocks and watches was conjured up almost as if Salvador Dali’s “Persistence of Memory” was being projected musically; a lasting imprint of innovation and originality from the woodwinds and the brass of Anthony Braxton and Taylor Ho Bynum.