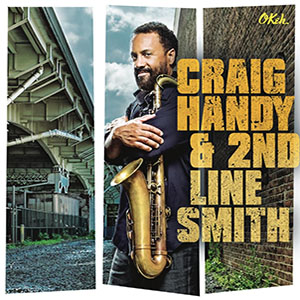 Even before the enormous, dry and fat tone of Craig Handy starts to solo on Craig Handy and 2nd Line Smith the rollicking swing of exuberant, almost intoxicating New Orleans jive begins. It is heard in the first chords of “Minor Chant,” a chart that sets the mood for the rest of this astonishing album. Immediately there is also a concern whether there will be enough locomotion to last the whole album through, but that worry dies a quick death. Mr. Handy has conceived this tribute to New Orleans in the grand manner. First he brings the imposing sound his big tenor to bear on a clutch of wisely chosen charts. Then there is his ensemble: a roaring Hammond B3 played by Kyle Koehler, a growling sousaphone—a smart substitute for an acoustic bass—handled with aplomb by Clark Gayton; then three great drummers: Jason Marsalis, Herlin Riley and Ali Jackson, all of whom play perfect time and pulse, and handle the marching repertoire with joyful abandon. The guitar chair is handled by Matt Chertkoff and the piano is hardly missed; not that there would be on in a 2nd line Smith. Guests: Wynton Marsalis on trumpet on “Got My Mojo Working” and vocalists Dee Dee Bridgewater and Clarence Spady sing as if their lives depended on it and of course Mr. Handy arranges it all with the sure touch of a master.

Mr. Handy solos on each of the charts and each time he does his voice sounds ecstatic. His dramatic turn on “Organ Grinder’s Song” is the epitome of perfection. His tone is appropriately, and by turns, rough and raspy and tender and always masterful. On “I Almost Lost My Mind,” the chart by Baron of the Boogie, Ivory Joe Hunter, Mr. Handy excels himself as he seems in complete control of the melancholy tempo and also the rust-like colours that seem to waft from out of the bell of his horn. Moreover there seems no better example of playing that penetrates the subtle beauty of New Orleans. This also seems to be the perfect chart to set the ensemble up for the rawhide of “High Heel Sneakers” that takes off upon the clarion call from Mr. Gayton’s sousaphone. It’s all mighty blowing and jitterbugging after that. On a serious note, however, Craig Handy has created one of the most sensationally up-beat homage to New Orleans. There is virtuoso playing and playing with sophistication and also big hearts. Visual imagery of the New Orleans of Louis Armstrong and King Oliver, and Buddy Bolden before them ordains the music and just when it is expected that the music might come undone and turn mouldy fig, Matt Chertkoff steps on the wah-wah pedal and away goes the band, aided and abetted by dramatic accents by Mr. Gayton’s sousaphone take over and brighten up the proceedings.

Vocalists would be de rigueur in the New Orleans of a 2nd line and the merriment of the carnival atmosphere is upheld with cool by both Dee Dee Bridgewater, who is sublime “On the Sunny Side of the Street” and by Clarence Spady on “Mojo Working”. And finally Clark Gayton has his say with a loose and sassy solo on “Mellow Mood,” something he shares with Matt Chertkoff, who slides in before Mr. Gayton hits warp speed. Credit must however go to Craig Handy—who has his final say on “I’ll Close My Eyes” with utter beauty—for shepherding this exquisite album, which is destined for classic status, all things considered. 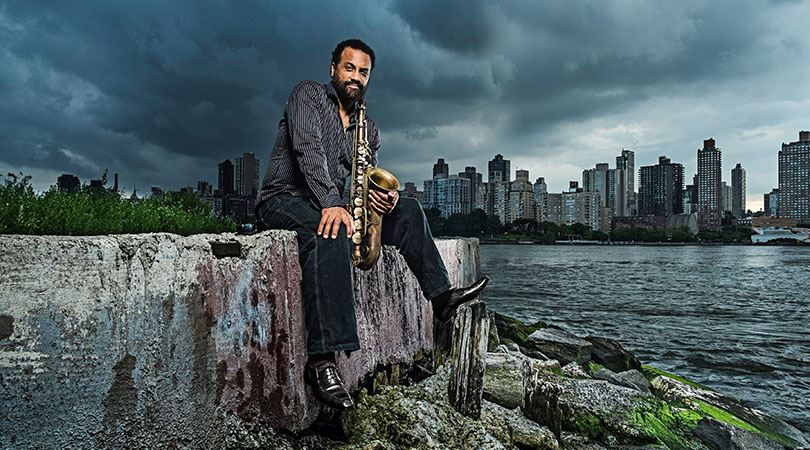 Born in Oakland, CA, as a music-hungry youngster, Craig Handy experimented on guitar, trombone, and piano before settling on his first true love, the saxophone. At the age of 11 while listening to the radio, Handy fell under the spell of the transcendent saxophone playing of jazz legend Dexter Gordon. Berkeley High School’s (CA) reputable Jazz Program soon beckoned, and Handy joined the ranks of graduating stellar saxophone talent including David Murray, Peter Apfelbaum, and Joshua Redman, to name a few. He attended North Texas State University and won the coveted Charlie Parker Scholarship which enabled his early college experience as a psychology major and frontrunner in the school’s exceptional One O’ Clock Jazz Ensemble.

Craig Handy’s distinctive sound and authentic instrumental prowess were redoubtable traits immediately noticed by artists of stature, especially those committed to nurturing new talent on the bandstand and road. Handy moved to New York in 1986 and began several associations with formidable artists including master drummers Art Blakey and Roy Haynes, South African melodist Abdullah Ibrahim, and the Mingus Dynasty Band. During a Mingus Dynasty engagement, one audience member – none other than an impressed Bill Cosby – approached Handy and eventually invited him to be the featured soloist in his sitcom’s music theme for 1989-90’s “The Cosby Show”. This was followed by a contract to score, produce, and perform music slated for “The Cosby Mysteries” 1994-95 season.

Eager to begin leading his own bands, by his late 20s Handy was already considered a technical master and prodigious post-bop talent. He also relished musical range by performing with veteran vocalist bandleaders such as the iconic Betty Carter and later the irrepressible Dee Dee Bridgewater. He played with Haitian and Salsa bands during this time as well. In 1992 he decided to lead his first of two advanced hard bop recordings on Arabesque Records, Split Second Timing, which featured Handy on both tenor and alto saxophones; pianist Ed Simon; bassist Ray Drummond; drummer Ralph Peterson, Jr.; and guest trombonist Robin Eubanks. Two years later he followed with Introducing Three For All + One, a highly praised trio recording with bassist Charles Fambrough and drummer Ralph Peterson, Jr.

Handy was also a convincing and telegenic actor in Robert Altman’s 1994 film Kansas City, portraying saxophonist Coleman Hawkins. In 1995, he continued playing with the new critically acclaimed band “Chartbusters”, featuring alto saxophonist Donald Harrison, organist Dr. Lonnie Smith, and drummer Idris Muhammad (a harbinger of things to come this fall, if not the past five years) and recorded two releases on the NYC and Prestige labels. Handy toured with Herbie Hancock throughout 1996 to mid-1999, and he led two more recording projects on the Sirroco label – 1999’s Reflections in Change and 2000’s Flow. By this time he had amassed performing and recording credits with Cedar Walton, Elvin Jones, Joe Henderson, George Adams, Freddie Hubbard, and Wynton Marsalis.

For the past several years, Handy has recorded or toured consistently with guitarist John Scofield, trumpeter Charles Tolliver, the John Hicks Legacy Band, pianist Kirk Lightsey, trombonist Conrad Herwig, the Mingus Dynasty Band, and most notably The Cookers – a collective of stalwart leaders renowned for playing that simmers or surges to a boiling point – with brethren Billy Harper, George Cables, Eddie Henderson, Billy Hart, Cecil McBee, and David Weiss. Handy is also touring of late with the Jazz at Lincoln Center Orchestra.

In 2014, Handy returns as an original bandleader and party-starter for his new touring and recording project on the venerated OKeh label, a division of Sony Masterworks. Titled Craig Handy & 2nd Line Smith, Handy draws from his fondness for the music of New Orleans, smack attached to the groove-filled re-imaginings of originals and standards by the late, great organist Jimmy Smith. The release includes cameos by Dee Dee Bridgewater and Wynton Marsalis while filling a rotating drum chair with Jason Marsalis, Herlin Riley, Ali Jackson, and Steve Williams. But the band at the core of the recording springs out of Handy’s current residence in Weehawken, NJ, and shines a light on organist Kyle Koehler, guitarist Matt Chertkoff, and sousaphonist Clark Gayton. (Source: craighandy.com)