Home Music Marcos Amorim: Sea of Tranquility
Think of Brasilian guitarists and their music and the history is old and deep. Sometimes, when listening to Marcos Amorim on Sea of Tranquility it also seems as if it extends to a time before Brasil, as we know it today, even existed. It’s not really a profound observation; it’s just the way it is; a vibration that seems to bloom at the very moment that sound stops being trapped in the moment of Time and escapes into a silent atmosphere – in this case even in a room as mundane as the recording studio in which this music was made. To the ear it is something wondrous; like discovering that one’s sense of hearing has suddenly been awakened or restored, almost by Christological (and not an instrumental) intermezzo after a lifetime of silence.

The miracle of this music on Sea of Tranquility by Marcos Amorim is such that it also awakens the sense of wonder in a 5-year-old child, Leo, the son of Carlos Fuchs, the engineer on this recording. Mr Amorim describes hearing the boy speak of “Sea of Tranquility” (the song) as if seized by the effects of its existential affirmations just as he (unbeknownst to his 5-year-old mind) is possessed by its melody and its rhythm. 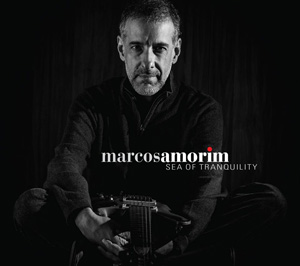 To make an impression on the pure, untrammelled nature of a child this music must have something almost supernatural in the manner of its performance and there are nine songs on this album that fulfil this testament to the artistry of Marcos Amorim.

In a sense this diathesis, this grammatical feature that describes the melodic verbs that Marcos Amorim uses to ascribe to sounds uttered through the metaphorical “mouths” of his musical creatures, turning these creatures into living beings singing, laughing, crying…and just breathing. “Minha Deusa Africana” (“My African Goddess”) is a sublime example of this mystical transformation in the form of a song as the dots from the paper are lifted heavenward released as it were, from the mouth of this mythical being. Or is she alive? The visceral experience from this – and other – music on Sea of Tranquility suggests nothing less than such a miraculous, absolutely timeless phenomenon that occurs at the hands of Marcos Amorim.