The success of a big band, i.e., the fact that a regular one exists at all, is to be highly commended. But one such as is fronted by the stylish gracefulness of vocalist and bandleader Marc Secara demands much more. It is also rare to find an ensemble that represents the very best of Brandenburg culture – certainly it is a welcome counterbalance to the mind-numbing, so-called “techno” music that explodes out of the cavernous clubs in the celebrated city of the Weimar of JS Bach.

This music on Songs of Berlin also deserves special mention because, in fact, in many respects it is speaks to the culture that the great Marlene Dietrich walked away from to resettle her classic “Berlin Noir” music and dance in the USA. 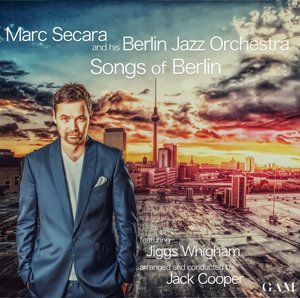 To his great credit, however, Mr Secara also joins the incomparable Ute Lemper [who seems to stand alone as the keeper of Miss Dietrich’s flame].

Mr Secara is also an artist of the first order, a vocalist who seems to be born with a supple tenor voice that is bathed in warmth, thrives on swing and swagger as his music soars above a band – the musicians of which are fully attuned to his vision and artistry. The critical cog in that wheel is the trombonist and conductor Jiggs Whigham, who is credited as music director. Between these two gentlemen this music is played as if shot out of a bow with passion, an inspired sense of swing, and with the kind of fluency that the writing so richly deserves.

The scoring throughout is extraordinarily rich and in Mr Secara’s hands – and his linguistic versatility and practiced [throat and] diaphragmatic breathing – it rises in great gusts of air swirling and dancing in front of the musicians who play like the well-oiled machinery that they have come to be. Instrumental soli are beautifully shaped and balanced to complement Mr Secara’s sculpted vocal lines. The singer’s timing is also impeccable and this makes for unerring swing between him and the winds, brass and rhythm sections.

The hairpin dynamics that power songs such as “Where are we now?” and “Mackie Messer” , an inspired take on the almighty classic “Die Moritat von Mackie Messer “ [“The Ballad of Mack the Knife”], a song composed by Kurt Weill with lyrics by the great Bertolt Brecht for their immortal 1928 music drama Die Dreigroschenoper [The Threepenny Opera].

The soloists are excellent; harmonic variations are invoked with assertive authority. Vocalist and instrumentalists parley with the kind of familiarity of old friends and this makes the music exciting and almost insolently stylish without any gratuitous posturing. All of this makes for a truly memorable album from a singer and his band about which much more needs will be known is very short order.