If, as has been said, chamber music is a conversation among friends then this is not only a lively one but also a very wide-ranging one that takes place on the album, Veneta. The musical “chat” between the musicians of the Miguel Espinoza Flamenco Fusion ensemble is also one in which disparate elements that have played a role in forming this music and in like manner, it is one in which everyone has a say, bringing to this art discourse, not only the flamenco that informs Mr Espinoza’s cultural references, but a wide sound world of different periods and stylistic pursuits. 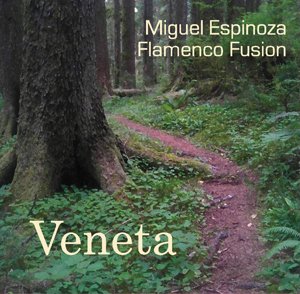 We hear, at the very outset that the chronology, while dwelling in the modern, also includes “Gnossienne”, from the famed cycle of music by Erik Satie, albeit interpreted in the style of flamenco. Happily, though, it makes eminent sense to play the work with that kind of twist and is also utterly pleasing to the ear. One could not imagine an entirely different reading of the piece than this; neither could one be surprised by how – with the lightness of this performance – how exciting and naturally authentic the interpretation sounds. Flamenco inflections are summarily restored in good order with “Bulerias Barrocas” on which there is no mistaking where this group’s – and Mr Espinoza’s – musical heart lies.

Rhythm and pulse are at the heart of the flamenco, just as the deep seduction of the song is its soul. This duende is very much in evidence on this disc. But with the addition of the tabla the frenzy of the rhythmic experience is hugely magnified. Naturally, such a visceral energy would make for a wind-up that is impossible to let go of. This is also very much the norm on this album. Even the usually noble and gracious momentum at which a cello is played is reinvented per force because of the innate energy of flamenco. Dianne Betkowski is eminently up to that task. The bold pizzicato of her strokes on “Veneta” [another fine buleria]is a fine example of that aspect of her technique – which, together with her gliding playing con arco makes for a truly virtuoso performance.

Of course, all the musicians having bought into the leader’s vision parley like old friends sharing the joys of fellowship with some fine music.