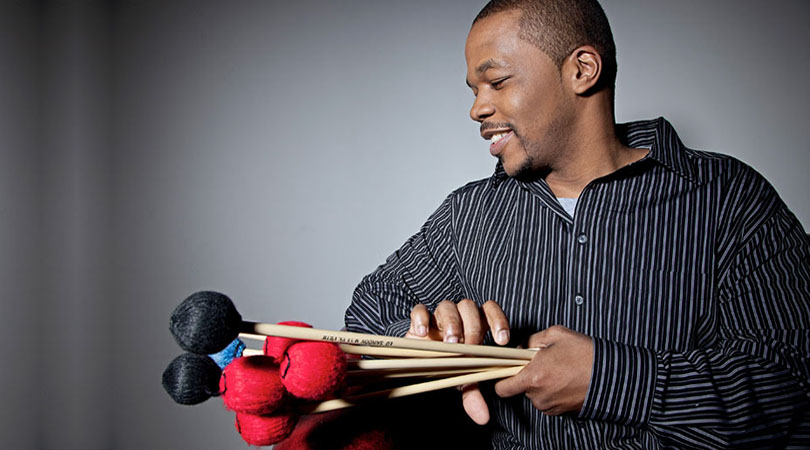 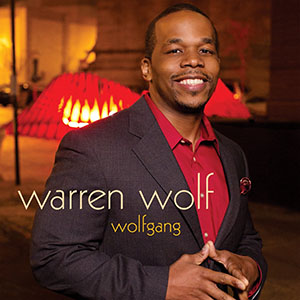 There is an everlasting quality about Warren Wolf’s recording, Wolfgang. If the ingenious vibraphone virtuoso should at all be diffident about his achievement here it might be appropriate to suggest at the very outset that forms a direct link from Milt Jackson to a place from where it reaches forward, far ahead in time and space. After all, his instrument—the vibraphone—was made for an undying sound, where note clusters colour musical silences; something he accomplishes by raising the emotional temperature of the notes he plays—matured as if in an oaken cask. Then he gathers these into phrases that dapple the emotive narratives moist and glistening with tears of melancholia and joy soaked up as if into a nimbus cloud in a sheltering sky. Mr. Wolf is also a very sophisticated vibraphone player. Through him flows rivers of music cascading through realms encompassing the classical as well as jazz idioms; his quest to unite the two is far more mellifluous than a mere fusion of sound with the suggestion of classical phrases quoted from time to time. The vibraphonist is a true musical intellect who has imbued the music of his illustrious namesake in the classical world as much as he has the great players in jazz—from Red Norvo and especially Milt Jackson—melodic two mallet players, (although Mr. Norvo also used four mallets depending on the musical situation), who helped create an unique sound and under whose inspiration, it appears, he is contributing to enlarging the literature of music for the vibraphone.

In a manner of speaking, Warren Wolf might embody the statement once made by Mr. Norvo, who considered the instrument rather a “vibraharp”. Not to put too fine a point on that suggestion, Mr. Wolf seems to play his instrument rather like that blended sound of a mallet-driven instrument with pedals to elongate the sound of music, as well as suggesting the rounded edges of sound much like the ones plucked from a harp. The music is thus more plump and fulsome here. It is leaden with suggestion and layers of meaning. His “Sunrise” is thus, not merely a visual that captures a natural, everyday phenomenon, but a veritable overture to the celebratory drawing of the curtain on a new day in life. Here he is beautifully aided and abetted by one of the musical teams on the recording: This comprises Aaron Goldberg on piano, Kris Funn on bass and Billy Williams Jr. on drums. Here Mr. Wolf displays one of his strong suites; his ability to play the same note in a repetitive phrase, with minor variations in the pressure with which his mallet strikes the keys. Thus a glancing blow might suggest a different emotion from the one suggested by a direct hit upon the same key in the same phrase repeated in another chorus. He does the same in “Frankie and Johnny” and makes the characters—both male and female—come alive with all the idiosyncrasies suggested by original playwright and librettist, Terrance McNally. And here, in this tune, Mr. Wolf also introduces the other star cast featuring pianist Benny Green, bassist Christian McBride and drummer Lewis Nash. It is also here that Mr. Wolf doffs his proverbial hat to MJQ, with Mr. McBride, phrasing in a walking sequence brimful of suggestion that Percy Heath was top of mind.

The dramaturgy of the recording follows the opening sequences: first from the exquisite waltz: “Sunrise” and then from the even animated tragicomedy: “Frankie and Johnny”. Rhythmic invention abounds in “Grand Central” as it bustles with hot, jammed chords by Mr. Goldberg, woven into a jabbering solo by Mr. Wolf. And then there is that not so brief interlude which features a classic duet and etude with pianist Aaron Diehl, where the riches of both musicians’ geniuses are beautifully evident in that sonata, “Wolfgang”. Clearly Mr. Diehl and Warren Wolf have an empathy that goes a lot further than most duos go and this is also reflected in “Variations Sur “Le Carnaval De Venise””, where Mr. Wolf excels on the flatter-toned marimba, which he seems to be infused with musical highs seeming to recall as much landscaped music as much as architecture as those highs begin to form the domes and cupolas of rotunda of that great city. And then there is the indigo blues ensconced in the melancholia of “Annoyance” beautifully introduced by Christian McBride’s arco solo. Blues—the very suggestion of it—dapples the majestic “Things Were Done Yesterday”. “The cascades tumble and fall in the vaunted runs and dazzling musical spirals of “Lake Nerraw Flow”. And in “Setembro” Warren Wolf brings the full weight of his style of playing to bear —literally and figuratively—upon the wistful lyricism of the piece. And this is made more complete with Darryl Tookes’ soaring wordless vocal. Bringing the choral element into play is one of the other reasons why this album is certain to become a desert pick.