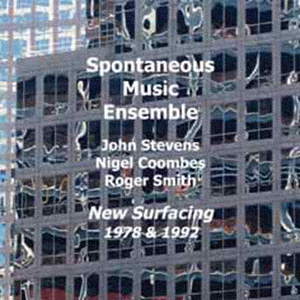 There are two aspects of this magnificent record New Surfacing, which make it a rarity and a true collector’s piece. The first is that it is a relic of a memorable concert—the final concert of the last, and trio incarnation of the Spontaneous Music Ensemble (SME)—one that almost never made it to this version of the record. The second is that of both the concert and “Complete Surfaces” cuts deeper than the title suggests and is a part of the “last will and testament” of the great British drummer, John Stevens, a founding member of the super-band, the Spontaneous Music Ensemble that was founded in 1966. In all of the music on the album, Mr. Stevens displays the technique and singular musicality that made him one of the best-known percussionists but also one of the most sought after free improvisers in all of Britain. As a result of this latter fact, Mr. Stevens played with some of the finest musicians in that country, including Evan Parker, Derek Bailey, Peter Kowald, Julie Tippets, Robert Calvert, John Martyn and Danny Thompson. In the late 1970s, the SME also settled down into a trio, with Roger Smith on guitar and Nigel Coombes on violin. It was this trio that was responsible for that remarkable concert at Newcastle, in 1978.

Very early on in his career, John Stevens became interested in the music of Anton Webern, the Austrian musician and composer who became associated with the Second Viennese School and who also became one of the best-known exponents of twelve-tone serialism. In addition Mr. Webern’s innovations regarding schematic organisation of pitch, rhythm and dynamics were seminal in the musical technique later known as total serialism. John Stevens absorbed all of this and it informed his singular voice as a percussion colourist, something that is dramatically on display on this album, New Surfacing. Mr. Stevens’ towering personality is indelibly stamped on the fine performances that mark this album. His exemplary playing is marked by his unique approach to improvisation. This was once summed up by Evan Parker as being two basic maxims: the first was that if “you cannot hear another musician, then you’re playing too loud,” and the second was that “there is no point in group improvisation if what you are playing doesn’t relate to what other members of the group are playing.” Both of these aspects of John Stevens’ technique and practice are on call in the performance at Newcastle and on the track, “Complete Surfaces”. Mr. Stevens also devised several unique starting points for improvisation. These were not “compositions” as such, but rather a means of getting improvisational activity started, which could then go off in any direction. One of these was the so-called “Click Piece” which essentially asked for each player to repeatedly play a note as short as possible.

The violinist, Nigel Coombes and guitarist Roger Smith make up the extraordinary trio on this final incarnation of the SME. Mr. Coombes, playing an instrument where pitch is virtually infinite, still manages to play most of his notes—and thus almost all of his phrases—in short and wild bursts. His soli are informed by subtle gesture and wonderful expression. Roger Smith’s instrument might be said to fall somewhere in between a variable and a fixed pitch one. And he makes outstanding use of this fact; plucking the strings staccato and sometimes gliding his hands across fret-board and strings stretched taut across the body of the guitar. The guitarist is as distinctive in his dynamics and expression and forms the veritable backbone of the trio at times. There is also something to be said of the live recording, which is exceedingly crisp despite being wrought from a master that may have seen better days. The studio session that produced “Complete Surfaces” is a fine one as well. And this ought to draw attention to the imprint on which all of the music appears.

Martin Davidson’s EMANEM label is a magnificent one; as rich in repertoire and outstanding in the technical aspects and final packaging of its product as New York City’s ESP-Disk. Both labels captured the excitement of the 1960s and 1970s scene just as much as it did the great music that has since become an integral part of the cultural anthropology of those decades. But Mr. Davidson’s EMANEM label is unique in that it spares no effort to document visually and with wonderfully detailed liner notes. New Surfacing is a fine example of this kind of package. However, it ought to be cherished by both the fan of improvised music as well as musical historian alike for its musical and extra-musical documentation as well.