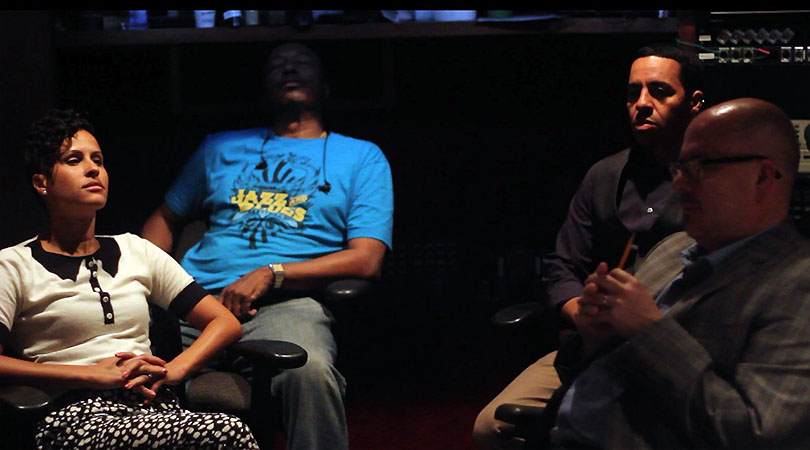 Just before his spirit ascended to Jazz Valhalla, Eric Dolphy was interviewed by a radio station in Hilversum, Holland. Speaking about the spectral nature of music, Mr. Dolphy said, “When you hear music, after it’s over, it’s gone in the air. You can never capture it again.” This recording by pianist Cava Menzies and trumpeter Nick Phillips, Moment to Moment comes close to the supernatural nature of music: the one that is governed by Gaia in its personification of the Earth. However, like the proverbial exception to the rule unlike Eric Dolphy’s philosophical observation, the music of Ms. Menzies and of Nick Phillips and their exquisite bassist and drummer, dallies for some time longer. Heavy with the bronzed glow of the horn and the dense beauty of Ms. Menzies’ sinewy harmonics informed by a palette of spectacular colours, the music gathers like a great bank of gorgeously fluffy and rippling cumulonimbus clouds sheltering in an endless sky. 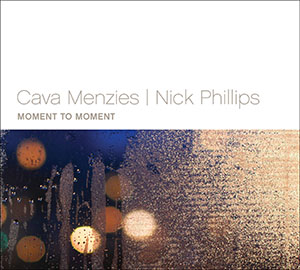 It takes courage to attempt a whole recording of music as elementally and beautifully contemplative as this repertoire. This provides no respite for the musicians, who must, of necessity, meander at an almost ponderous tempo in order to fulfill the promise of the lyrical—and sometimes sad—narrative ensconced in the songs. Although melancholia is not the kind of emotion that runs through the gorgeous rendition of Jimmy Rowles “The Peacocks,” its tempo and the manner in which the song is paced is reminiscent of Maurice Ravel’s “Prélude à l’apres-midi d’un faune,” which puts this interpretation in a league of its own. That Ms. Menzies can dwell in the vision of the exotic birds as if they were part of birds seen on a ceiling of alabaster. Such is the quiet rustle of her notes played across the glorious rumble of Jeff Chambers’ bass. It also appears that Nick Phillips’ trumpet is made for the song. Burning with slow passion, Mr. Phillips seems to come from the line of pathos and irony created by Miles Davis; even Jaz Sawyer, who graced the recordings of the great Abbey Lincoln, is stately and painterly and marvellously understated. This exquisite tone poem sets the pace and the tenor of the entire album.

Cava Menzies is the daughter of Eddie Henderson. Her pedigree goes way beyond that, however. Her playing suggests direct lineage from pianists such as Herbie Hancock. But more than that Ms. Menzies seems to have “listened” with great care to the great Walter Norris. Steeped in her own ideas she has melded Mr. Norris’ own notions into her singular voice. Her lines undulate gracefully and sometimes curl into sensuous arcs that complete themselves as they wrap into parabolas. Narrative lines proceed lyrically in a linear manner; but ever so suddenly they might turn and be party to dramatic inversions. Her soli are breathtaking; she shows great strength; great fortitude as she ascends almost vertical faces in the melodic leaps that she makes. Ms. Menzies also seems to play off Nick Phillips as if engaged in an interminable and sensuous dance. For his part, Mr. Philips is up to the task. He has the remarkable ability to delay the resonance of notes without much vibrato. His handling of the mute is exquisite; he is in a minority of one when it comes to eliciting the primal cry of the horn, then making it sound almost human as notes bend and twist at his command. Between pianist and trumpeter a great relationship has been forged. Should they make more recordings together these are bound to be as remarkable as this one as well.

Track Listing: The Peacocks; Mal’s Moon; For All We Know; You; You Don’t Know What Love Is; Almost Blue; Phantoms; Speak Low.