Libby Larsen is a modern composer of bristling intellect, informed by a rare genius for capturing the unfettered emotions of the human soul. Her music is filled with the quintessence of a rarefied realm but remarkably she manages to keep both feet planted on terra firma; suggesting a musicianship that is large – larger, it may seem, than life itself. All of this might give her music an aura of impenetrability and suggest her compositions are rather inaccessible but this could not be further from the truth. In actual fact when she commits pen to paper and the dapples staves come alive with the notes she hears you are imperceptibly drawn into her sound world and your ears and heart yearn for the language and literature of music that she creates. 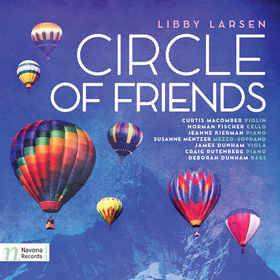 The range of atmospheres and emotions, and poetry of her scores make for music that is stunningly created for performance and you are drawn into her sound world immediately falling prey to music that is at once whimsical and tortured, sensual and ecstatic. The invigorating delicacy and earthiness magically embedded in the ethereal beauty of the music finds myriad nuances – both in the voice and in the various instruments – to heighten the expressive moment. The musicians, for their part, respond to Ms. Larsen’s notes about earthly (human) and celestial (atmospheric) energy with rapturous lyricism melding voice and piano, and strings and piano in a series of lilting utterances. The extent and importance to Ms. Larsen’s commitment to the voices of strings and piano especially on Up Where the Air Gets Thin creates an all-encompassing sound environment rather than a mere literal interpretation along the lines of some of her contemporaries unfolding like gossamer fluttering in a withering wind.

The score for Trio for Violin, Cello and Piano is dense with clusters of notes where the each crochet is infused with a 52-56 rhythmic utterance, executed with ‘furious rhapsody’ that belies a broad affinity for jazz at the outset but later on settles for something that is more liquid and thus imbued with a more free-flowing personality. The Viola Sonata, although informed of a crotchet = 60 is more spare and suggestive to the players. As a result the music breathes more freely and this leaves space for more emphasising the sound world of the instruments employed. Sifting Through the Ruins is deeply melancholic. The vividness of the terrible events that have inspired it are beautifully expressed by the pristine mezzo-soprano of Susanne Mentzer, an inspired choice for both the purity of her voice as well as the register of its range. The recording returns to Ms. Larsen’s beloved jazzy affinities in Four on the Floor, the 138-144 to the quarter note will leave the avid listener absolutely breathless. All of this music is assisted to sensitive effect by the various players and the engineering of Judith Sherman.

Libby Larsen (b. 24 December 1950, Wilmington, Delaware) is one of America’s most performed living composers. She has created a catalogue of over 500 works spanning virtually every genre from intimate vocal and chamber music to massive orchestral works and over 15 operas. Grammy award-winning and widely recorded, including over 50 CD’s of her work, she is constantly sought after for commissions and premieres by major artists, ensembles, and orchestras around the world, and has established a permanent place for her works in the concert repertory. Read more…