It’s been proven. You cannot really have a Christmas without eggnog – and for those who might be a tad more adventurous – some well-aged cognac…and jazz. First, however, you must fill your stocking with the right stuff. If you can already breathe the aroma of the cognac, then it’s time to warm up the valves of your amplifier as well. Jazz scripture is not pre-ordained. That, after all is the very nature of the music. So there must always be the sound of surprise if it’s going to be worthwhile. The imperishable music of Bing Crosby might warm the cockles of your heart, bring a thrill to others and be a fine postlude to worship and fellowship. But there is always more. Or you might warm things up with a fine recording of the Nutcracker by the Duke Ellington Orchestra. 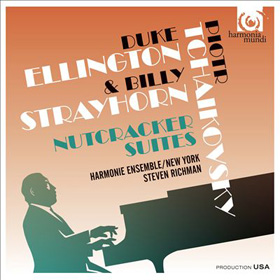 A memorable disc was produced in 2014 by Harmonia Mundi. It was recorded by the Harmonie Ensemble/New York conducted by Steve Richman. The Nutcracker Suites featured two versions of the classic piece back-to-back. The first was from Piotr Ilyich Tchaikovsky’s original score of The Nutcracker Suite used in the ballet. This is followed by the Duke Ellington Orchestra’s re-imagination of the suite, arranged by The Duke and Billy Strayhorn. The original – if you can still lay your hands on it, was recorded between May and June of 1960 and released in time for Christmas that year. This would make for the finest Christmas of all. However, this 2014 recording is made quite exquisite by Lew Tabackin on tenor saxophone, Lew Soloff on trumpet, Bill Easley on clarinet, Victor Lewis on drums and the great George Cables on piano.

Buy The Nutcracker Suites by the Harmonie Ensemble/New York on: amazon

This year Pittsburgh Jazz Orchestra has produced something almost as memorable. Joyful Jazz might not feature any of Billy Strayhorn’s arrangements of traditional fare, but Mike Tomaro and his band of merry men have done yeoman work on both traditional and non-traditional fare produced for record by Marty Ashby. At the vocal end of the spectrum is Ann Hampton Callaway’s The Hope of Christmas. It features the lyrics of William Schermerhorn. Both recordings come highly recommended and you would not be remiss if you picked them both up for your feet-on-the- ottoman, cigar-smoking, post-worship, post-fellowship and snuggly Christmas. 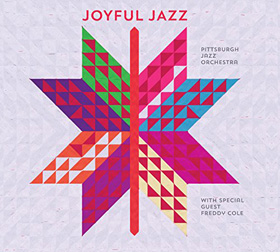 Joyful Jazz features the vocals of Freddie Cole. It might not be possible to bring home good cheer without the velvet pipes of Mr. Cole. I never fail to be amazed by how much like his brother, Nat King Cole, he sounds. The younger Mr. Cole is his own man and while it does not take this recording to prove how singular a vocalist he is, this is also a fine example of how he can make some standard fare sound special. White Christmas (in the Sahara) is a fine example of this as is Jingles, The Christmas Cat and A Cradles of Bethlehem but there is also the trumpeter Sean Jones who is featured on three tracks. The trumpeter is spectacular on all three especially Merry Christmas John Coltrane.

Buy Joyful Jazz by the Pittsburgh Jazz Orchestra on: amazon

The Hope of Christmas by its very title might sound more traditional. However, it is made up of wholly new compositions written by various musicians and glued together by the lyrics of William Schermerhorn. None of this would have sounded remotely beautiful without the silken voiced Ann Hampton Callaway. For pomp and circumstance you might preface this recording with the Harmonie Ensemble/New York recording and then spinThe Hope of Christmas. Now that would put a new spin on things. The flavour is as exotic as frankincense. The orchestra is well-oiled and also features the New York Voices, Gerald Albright, Jay Ashby, Five Play, Michael Davis, Hubert Laws, Chuck Loeb, Claudio Roditi, Ted Rosenthal and Steve Wilson. 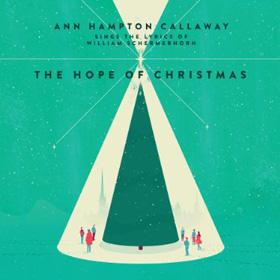 However, it is Ms. Callaway who steals the show here. She is svelte and beckoning and even when things get a bit sad and melancholy seeps on she manages to sound hopeful. Some of the music is puckish and gently so. You might give an arm and a leg to be in the room with Ms. Callaway. The intimacy of The Hope of Christmas and Fly with the Angels but every track is a gleaming piece of rare metal forged in the fire of some of the finest musicians that classical, jazz and many other idioms has to offer. The best thing about this record is easily the vocal aspect of it. The more adventurous might even put away their Céline Dion and their David Foster (although for flag and country I would not recommend doing so). Still Ann Hampton Callaway makes for a vocalist who is larger than life and because she is made almost entirely of music, this record comes highly recommended.

Buy The Hope of Christmas Ann Hampton Callaway on: amazon

And spare a kind thought for the label, Manchester Craftsmen’s Guild (MCG Jazz), who are responsible for both Joyful Jazz and The Hope of Christmas. They are non-profit and support arts and learning in the Pittsburgh area. Better put your money where the future of The Music is. But wait… I hear that Jazz at Lincoln Center has also produced a recording of Christmas fare and although I have not heard it save for some clips on Facebook, that record might make a great stocking-stuffer as well. And never, never forget all-time great He’s A Christmas from the magnificent Take 6. Help the Grinch celebrate Christmas and while keeping the Christ in Christmas, you spice that up with some jazz as well.