The flutist Andrea Brachfeld is one of the most magnificent flutists playing today. She can conjure up any thing of beauty from the flutter of a lapwing to the excited palpitations of the heart; describe ecstasy in welling up in the soul with uncanny facility, weep like a willow and bring alive the excited yelp of a child and the gasp of breath that often escapes the lips of listeners who are fortunate enough to have a copy of this wonderful disc – Lotus Blossom, named after the equally magnificent Billy Strayhorn’s song of the same name. Ms. Brachfeld inhabits the song with heart and soul. In fact she bathes her spirit in the formless soul of each of the songs on this album. It is impossible to imagine these songs played with as much feeling and such virtuosity. 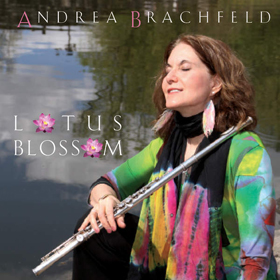 Ms. Brachfeld is like a rare bird soaring in a rarefied realm. If you think that her music is memorable it is because her very heart sings. I can think of just a few flutists – with the exception of Hubert Laws, Herbie Mann, James Newton and Lori Bell, and remarkably, the Canadian Jane Bunnett – who dig so deep when inhabiting a song. Don’t just take my word for it dive into wonderful world of Lotus Blossom and you will hear exactly what I mean. The profoundly beautiful Lotus Blossom will make the proverbial gasp of breath escape your lips. Ms. Brachfeld seems to have a special feeling for Strayhorn and it shows when she follows up the first Strayhorn chart with another gleaming gem, A Flower is a Lovesome Thing, played with elemental sadness.

Strayhorn is not her only strong suit, as this wonderful disc will testify. Her …. Performance on Herbie Mann’s Memphis Underground – a swinging dialogue with the great Wycliffe Gordon – is one of the highlights of the CD. This is what would get listeners wondering if her arrangement of Mann’s classic chart actually surpasses that of its original composer’s. As much as I have been wowed by Herbie Mann’s original this one by Ms. Brachfeld is truly breathtaking. And there is something else to be joyful about: Andrea Brachfeld has also endowed this album with three of her own works and these are absolutely exquisite pieces, the finest of which is easily Queen Girl, with its fetching vocals by nancy Harms.

Finally there is the group who help steer the music throughout the album. And what inspired choices they are. I cannot think of a better choice of a producer than the incredible Bill O’Connell who also excels on piano. Moreover there could not be a better drummer than Winard Harper and bassist Rufus Reid brings a gravitas to this music that few other bassist would have. Bravo Ms. Brachfeld. I, for one, will be holding my breath for her next adventure and I am sure t hat it will be just as beautiful as this one.

Track List: Lotus Blossom; A Flower is a Lovesome Thing; If I Love Again; Memphis Underground; What a Little Moonlight Can Do; Changin’ Up; Conception; There Was a Time; This is; Queen Girl.

I was brought up in a household where it was mandatory to take the piano. I studied it for seven years starting at age six. At age 10 I found out that you could take the flute in school and get out of class; so the flute it was! I entered the High School of Music and Art in 1969, majoring in the flute. There I met and played with, Noel Pointer, Nat Adderly Jr., Dave Valentín, Earl Macintyre, Buddy Williams, among many other fantastic musicians. Noel was instrumental (no pun intended) in teaching me how to write music down. Read more…