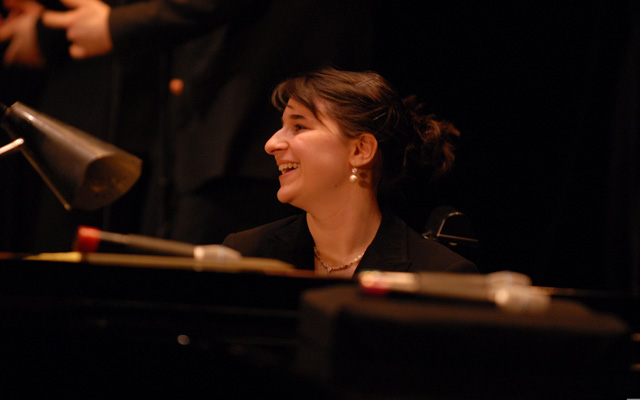 There has always been a place in music for the artist who can leave the audience gasping in disbelief. Even if you were not at the Xerox Auditorium on July 2nd, 2016, you can have a palpable sense of who happened when Laura Dubin and her trio took the stage that day when you put on each of these two discs that document what went on. There were probably many terrific pianists at the 2016 Xerox Rochester International Jazz Festival, but on evidence from these discs, only one who offered the profound and the spiritual, leaving many wondering if the ears had really heard what the brain had told them they heard. I can hardly believe my ears too. Laura Dubin’s electrifying performance is the ultimate in dizzying bravura pianism, whose hair-trigger reflexes out her in a class of her own. Those who saw only the epitomé of the shallow flashy showmanship by a young woman failed to see that behind the power, speed and intoxicating rhythmic élan is an original and disciplined musical mind, an unfettered imagination and a unique sound. How many young pianists can claim that? 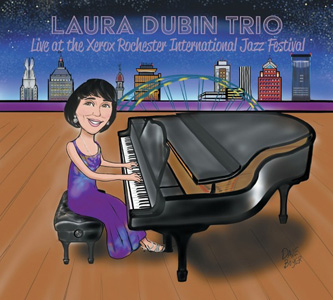 Not many; probably none, as a matter of fact. Laura Dubin is in a class by herself and it takes mere minutes into her performance to take you to feel her firm grasp of Jazz piano history, from the majesty of ragtime to a cheeky, jitterbugging stride, to death-defying swing, and the angularity and slippery art form of bebop to the audacity of free improvisation, Dubin surveys a century of Jazz piano in two hours of music with her husband and drummer, the stellar Antonio H. Guerrero and a brilliant young bassist, Kieran Hanlon. Song after song, Laura Dubin recalls Scott Joplin, Jelly Roll Morton, James P. Johnson, Earl “Fatha” Hines, Duke Ellington, Oscar Peterson, Jaki Byard, Thelonious Monk; a completely unscripted Keith Jarrett, Chick Corea, and then George Gershwin, Maurice Ravel, Claude Debussy and she even has the gall to take on Beethoven, Mozart and Chopin. Remarkably, through it all, Laura Dubin manages to sound uniquely like Laura Dubin. Her technique in arpeggios and vaunted runs and murderously difficult octaves is flawless. Her tempi and fingering are astonishing, and she uses relatively little pedal – her performance being made up of great musicianly hands and a great, almost unmatched musical intelligence.

Judging by the audience reaction to her ‘Prelude from “Le Tombeau de Couperin”’ and ‘Prelude to a Kiss’, ‘I Got Rhythm’ ‘Sonata No. 8 Pathetiqué’; and on Disc 2, ‘Spain’, ‘Reflets Dans L’eau’, ‘Sonata No. 11 “Rondo alla Turca”’ Laura Dubin justifiably lives up to the sensation and furore she has created from the stage. Her supple fingers, powerful fingers and superior pianism make this performance something to die for. What she seems to have achieved in just a few short years is truly incredible. This recording establishes her as the nonpareil of young Jazz players. Of course time will tell where she could take her art. On current evidence it is going to be a very short ride to that rarefied realm, where there’s room for but a few musicians. To the doubters out there, don’t just take my word for it, listen to her performance – all of it; and see if it’s not true.