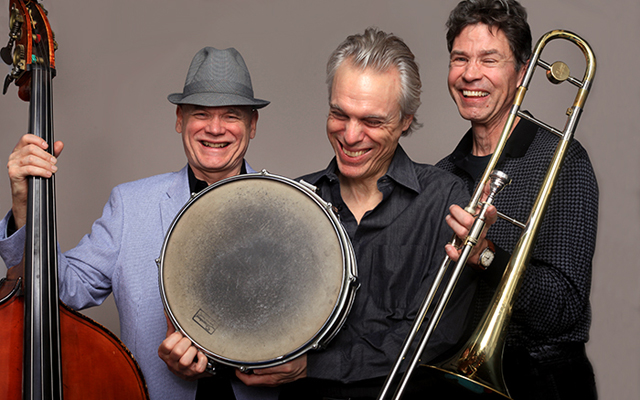 A bass, a set of drums and a trombone don’t come out to play often unless of course it is Mark Helias, Gerry Hemingway and Ray Anderson. The three musicians have been performing together as BassDrumBone for some time now – four decades (and counting) to be precise. The fused nature of the three words is much more than a syntactical gimmick; it represents a true melding of ideas, often a molten mix of lyricism, spritely elegance and vociferous invention that showcases not only individual virtuosity but a truly meaningful coming together for change. And when that takes place and music is unleashed with nightmarish intensity – as if does on The Long Road – expect everything to happen and nothing to be the same between the players as they tell the fascinating stories in song, from the ebullient marching of a 2nd Line in New Orleans to the elemental grown of the indigo blues of The Delta and other wetlands. 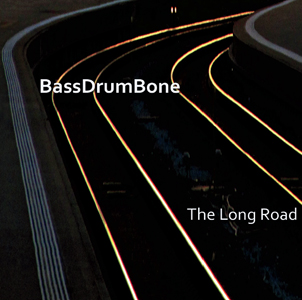 The music is substantial – check Ray Anderson’s ‘BluRay’, Mark Helias’ ‘Lands’ End’ and (for instance) Gerry Hemingway’s ‘Tone L’ – and develops with intense ensemble playing and dramatic individual monologues that gradually build the music’s architecture into works of an epic nature. Along the way one is treated to a master-class of how music devolves and ideas are exchanged: with the dark, imperious tone of Mark Helias’ bass, played with crisp finger-work and erudite temperance; the high-pitched shrieks and low growls as well as the splattering of ‘vocal’ smears of Ray Anderson’s trombone and the drums played by Hemingway with vindicatory zest, complete command of tempo and cross-rhythms that shift and change as the music demands. Clearly virtuosity is not the only perk that benefits the group and the idiomatically composed music that fills these two discs. There is a mutual respect for individuality that often melts in the heat of unison playing where ideas are shared as if six hands are sent to negotiate melody, harmony and rhythm, by a single brain. The result feels like being present as themes proceed to align and realign themselves like pieces of a jigsaw puzzle until the grand scheme of the music develops like a veritable passacaglia played with vociferous energy.

While no cracks appear between the fused linings of BassDrumBone, there is a constant sense of music being bathed in pools of sunlight. And yet none of the musicians seem to get in the way of each other. On the contrary the close association of the individuals and the manner in which one musician reacts to the other results in a sort of dynamic psychokinetic movement that fuels each and every interaction between BassDrumBone. You feel this especially when the trio plays in concert on ‘The Line Up’ and ‘Lands’ End’ at the end of Disc 2. Magically this telekinesis is also made possible when the trio is joined by two other master musicians: pianist Jason Moran and tenor saxophonist Joe Lovano. Both the guests take obvious pleasure in the musical details of the pieces on which they appear without losing sight of the larger picture as the spontaneity of the music of BassDrumBone is taken to another harmonic level.