Home Music Carla Bley Andy Sheppard Steve Swallow: Andando el Tiempo
Carla Bley has gone on record as referring to her smaller groups as – and I paraphrase – big bands in miniature. Bley gives us every reason to believe so on Andando el Tiempo a rather short but outstanding work that was released earlier in 2016 to commemorate the musician’s 80th birthday. Age has not dimmed her remarkable skills as a composer, arranger and conductor, which are her principal gifts, but has also – and this is something we become acutely aware of here – as a formidable instrumentalist. Somehow Carla Bley has been rather diffident about this and rightfully so, I suppose. However, with every recording that she has made with Steve Swallow, and with the bassist and Andy Sheppard or in other small groups where she has sat at the keyboard, she has made bold declarations of her pianistic prowess alongside the compositions she brings to life of course.

With Andando el Tiempo the ‘passage of time’ confirms Bley’s appetite for ‘big’ composition in ‘miniature’ and for pouring her profound musical wisdom into the suite of the same name and three other songs that embrace the full resources of piano, electric bass and woodwinds as she goes on to create deeply emotional music in an age nor given to much depth of thought. 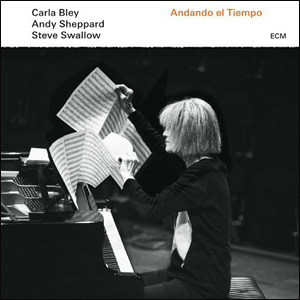 In the playing itself, there’s the same familiar mix of virtuosity and refinement that has marked out previous work by Carla Bley with the ubiquitous Swallow and Sheppard. The “Andando el Tiempo” suite itself is heart-tuggingly powerful music and all three performers clearly love its ravishing music, relishing every detail of this beautifully nuanced score despite the huge dynamic range demanded. Meanwhile, one must be aware that our hearts are not the only ones tugged at; Bley is reacting with much poetic grief to a friend who struggles mightily – and successfully – we are told, to overcome addiction. The piece is broken down into three wondrously varied – but wholesomely coherent – movements. Each is a highly sensuous statement of personal faith in the triumph of the spirit. The softly iridescent piano opens the 10-minute span of the first movement ‘Sin Fin’ before entering into a dolorous conversation between Bley and Sheppard prior to Swallow entering with a brief melancholic solo of his own. Bley describes this as a ‘realization that the endless cycle of medication required to stay free from anxiety and pain is becoming insufferable’.

Indeed, Sheppard plumbs the depths of his instrument with tear-laden notes that set a tone full of gloom and despondency. In ‘Potación de Guaya’ we find more phrases from pianist, saxophonist and bassist full of flowing tears, in an almost Wagnerian manner as the suffering protagonist comes to realise he must drink his bitter potion. The heaviness finally lifts in ‘Camino al Volver’ as the music the tonal colour of the music changes dramatically as the demons are exorcised beginning with Bley’s ascent from the bass clef to the treble, followed by skipping, staccato notes from Steve Swallow and Andy Sheppard as they too follow suit until all three musicians are entwined in music filled with much spiraling rejoicing.

“Saints Alive!” makes for a complete breakaway from the grim narrative of the principal suite on this disc. Written in the form of a stately waltz, it waxes eloquent as it describes naughty chatter between two indolent characters. Steve Swallow plays a subtly-constructed solo of beautifully coherent design as he presents a vivid evocation of the setting, drawing the saxophone into the conversation in a soft, yet thrilling response turning the music into a rich harmonic mélange, which of course benefits from the tensile virtuosity of Swallow and the gorgeous palate of colours that Sheppard employs. “Naked Bridges/Diving Brides” closes out this short set and brings the poet Paul Haines’ “…freefall fistfuls/Of sparkling albumen” magically to life. As the first half of the song melts into the “Diving Brides” element of the medley, Carla Bley conjures Mendelssohn’s iconic “Wedding March” from A Midsummer’s Night Dream. Carla Bley’s bracingly-judged transitions between the quotations from Felix Mendelssohn and Shakespeare’s Athenian comedy result in a fairytale-like composition; a fitting gift, indeed, from Bley to Andy Sheppard and his bride, Sara.