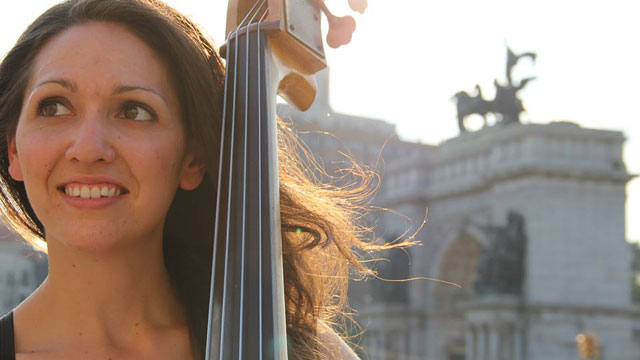 Move over bassists who can sing, Katie Thiroux is here, swinging relentlessly. Soon, her unbridled ingenuity in both aspects of performance might be legendary. For now, however, with this modestly titled debut record she appears to be on the way to that rarefied realm. Introducing… has 11 songs, 3 of them composed by Ms. Thiroux herself. Each piece is extraordinarily played. Each piece is decorated in bright colours and framed by that sinuous, woody sound of Ms. Thiroux’s bass. There is unusually mature thought and charm in her playing. Perhaps it is fitting that as a musician she is born, not made. Her virtuosity and almost supernatural intuition reveal the fuller scope of her effortless technical agility and uncanny sound-painting. This recording not only reveals her sensitivity to sound, but also her resplendent tone, precise articulation and a dazzling palette of colours swathed in a woody ambience, all of which is crowned by her wondrous vocal abilities. And this makes her a rarity even among bassists who can sing. 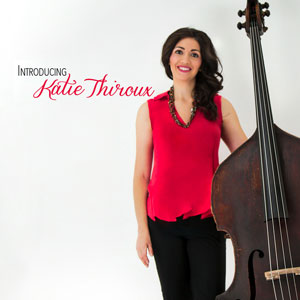 The recording begins with a wholesome, plush arrangement of “There is a small hotel,” in which Ms. Thiroux is featured in a demure setting. The vocals unravel in intimate tones with her bass alternatively delightful and breathless. The results are unabashedly romantic in a most alluring way. In “Ray’s kicks,” her playing absolutely sparkles with conversational animation and the kicking movements—scurrying lined and well-placed accents—are enriched by immaculately balanced suspensions and gorgeously firm root note. In another of her own compositions, “Can’t we pretend,” she paints a chiaroscuro of elemental sublimity and refinement and a sweetly contoured emulation of someone so helplessly in love. And in Frank Foster’s and Ella Fitzgerald’s classic, “Shiny Stockings” Ms. Thiroux is absolutely memorable: an excited sprite celebrating puckishly as the carefree narrative unfolds. Whoever chose this repertoire—and it must be assumed that it was the bassist in collaboration with the producer, Jeff Hamilton—was both wise and inspired. The splendid narrative content provides Ms. Thiroux with the stage to showcase her originality and inventiveness like no other musician in a long time.

Not enough praise can be heaped upon guitarist Graham Dechter, who plays an effective foil to Ms. Thiroux. He praises and edifies her superb playing with artistically chosen chords and single note lines that speak an eye for detail and a feeling for idiom that is as exacting as the bassist’s. Mr. Dechter is also a formidable talent, fleet of finger, elegant of phrase and a true string colourist. His performance is also most compelling. The same could also be said of the drummer Mike Witek, whose firm tempi and immaculate time-keeping propel this entire recording. And saxophonist Roger Neumann, when he is called upon to make an appearance, does so with great drama and a burnished voice so much so that he all but steals the chow from everyone, bar Ms. Thiroux. She, of course, remains firmly in control of the proceedings. Through all of this, however, she maintains a female persona that is alluring and sensuous in mystique and always unforgettable.

Track List: There’s a small hotel; Don’t be on the outside; A beautiful friendship; Wives and lovers; I’m old fashioned; Ray’s kicks; The one I love (belongs to someone else); Rosebird; Can’t we be friends; Shiny stockings; Oh what a beautiful morning

Katie Thiroux is a bassist and vocalist of outstanding talent and determination. Coming from a musical family in Los Angeles, she was surrounded by music; beginning with violin lessons at age 4 then switching to the acoustic bass at age 8. While continuing her studies on bass, Katie explored both jazz and classical vocal styles; landing principal roles in the LA Opera and Opera Pacifica by the age of 10. Captivated by an early recording of Lionel Hampton, Katie was driven to pursue her love for jazz and began studying privately with jazz vocalist Tierney Sutton at the age of 12. Read more…