In Three Seconds | Kolme Toista, a recording made a decade [or more] after his last one, Jussi Reijonen take us not just into another world, but into that very secret one that reveals the interior landscape of his mind. Here we meet not simply the spirits that haunt and uplift, but the very dust from where they come, swirling up in the hot sirocco that agitates every molecule of the wind that makes it sing and dance and make this music what it is: by turns lithe and sinuous, soft, almost feminine and full of bravado and machismo, like wind and rain… we make friends with Sami and bedouin, a little bit of each of that which is now part of Mr Reijonen, a Laplander, who spent his formative years in the Middle Eastern desert. 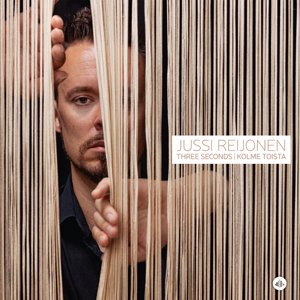 This is why Mr Reijonen hears music differently; because he hears sound differently: it comes to the interior landscape of his mind from the air of rarefied realms. That it took Mr Reijonen a decade to work out what he, like a few of us, has known forever: that we are possessed by no geographic boundary. Ho country can possesses us. We are made of wind and spirit, always transient of form. It is to Mr Reijonen’s credit that he experiences himself, his thoughts and feelings as something separated from the rest, as a kind of optical [and sonic] delusion of consciousness. It is what – as a Laplander he calls Kolme Toista – giving numerical values of the unweaving and weaving of the otherness of the selves – of which clearly he has three [hence the Three Seconds], a mystical yarn which makes up the triple-helix of his DNA [musical or otherwise]…

Albert Einstein learned this late in his life; that “This delusion is a kind of prison for us, restricting us to our personal desires and to affection for a few persons nearest to us. Our task must be to free ourselves from this prison by widening our circle of compassion to embrace all living creatures and the whole of nature in its beauty. When you’re born, you’re not without personality — it exists in its fundamental form known as temperament. Your temperament, which consists of innate features like energy levels, mood and demeanor, and emotional responsiveness, can then drive the learning experiences that form your personality throughout life.”

This long quote from one of the greatest of any generation would serve to explain how Mr Reijonen is able to pull disparate strains of his life experiences together in this music. This five-part suite will always remain unresolved – which is why it climaxes in what the composer calls a “Median” a mesmerising almost hyperreal depiction of the hypersonic strains of melody that are propelled by drum-rolls from Keita Ogawa and Vancil Cooper.

In the build-up to the half-resolved resolution – from “The Veil” to “Verso” – we follow the music as it unwinds as if in windrushes and swirls of melodies and harmonies that collide and explode and then reform other mushroom clouds of music which lead us to other worlds of shadows and light. This is eloquently evoked by violinist Layth Sidiq, cellist Naseem Alatrash [from Danilo Perez’s vaunted Global Messengers], together with pianist Utar Artun [who realises the sound of Mr Reijonen’s every microtonal intention].

Those musicians are conjoined with trombonist Bulut Gülen, and trumpeter Jason Palmer who summon spacey woodwind- and string-like tones from their respective instruments which float benignly over the sound of the string-driven ensemble. Meanwhile bassist Kyle Miles, often initiates the surprises that come – effective, but discreet a maqamat-like riff played as pizzicato harmonics and a delicate curlicue of a bass lines that underpins what sounds like the Laplander’s Sami lament.

It all sounds about right, as at the centre of it all is Mr Reijonen who has bared his very soul in music that mixes beauty and danger… the sound of the Noksu the raven, Apassi the wolfdog, the silent falcon and the wild saluki to bring us through the dark night of the soul with this inspiring music played so elegantly on his complement of guitars and oud…

Tracks – I The Veil; II Transient; III The Weaver, Every so often shifting sand beneath her; IV Verso; V Median