I cannot think of a pianist like Julius Rodriguez, who has made such an impression with his musicianship – not just pianism – on a debut recording since Herbie Hancock released Takin’ Off in 1962. And that includes everyone from Elew to Aaron Diehl and Sullivan Fortner. And with good reason: 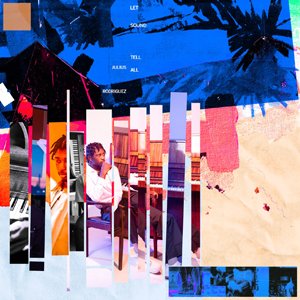 Let Sound Tell All is as complete album that you will get – compositions, interpretation and performance by instrumentalists, vocalists [including the inimitable Samara Joy], the manner in which instruments and voices meld [when called upon] into the liquidity of a sacred chorale, all of which makes the title of he recording emenintly suitable; and sound engineering [especially considering so many locations and engineers were involved]; all of which make production values something of a miracle. We’ve always known that Mr Rodriguez was a prodigy – like Trombone Shorty. However, such hyperbole is altogether warranted as this is an absolutely miraculous example of what Mr Rodriguez calls – almost self-deprecatingly – simply “The Music” [capitalisations are all mine].

There is so much music [all of it?] on this album that qualifies to be the proverbial “apogee” – an embarrassment of riches which calls to mind Pliny’s being “choked with gold”. When you think it couldn’t get any better than “Blues in the Barn”, for instance, your senses are assailed by one of the most mystical performances of Stevie Wonder’s “All I Do” – sung by the inimitable Mariah Cameron with Mr Rodriguez playing virtuoso piano and doubling up on drums, matching stroke for stroke, the great Joe Saylor. And as if that were not enough song after song impresses until…

The real apogee [really?] of the album, which is clearly “Where Grace Abounds”, a gospel-infused chart that propels Mr Rodriguez into the stratosphere where he is bound for glory. Note the sacred spaces that are filled with mystical washes of sound on the Hammond B3 organ by Mr Rodriguez and a celestial trumpet by the prodigious Giveton Gelin… abnsolutely spine-tingling.

This is one of the teaching moments of the album. Why? Because this is how a black musician sings in praise of his God-given gifts. No one else could have written a song like this. ‘Nuff said. And on and on it goes… “Elegy for Cam” is so affecting that one is, by now, a mass of quivering emotion. Of course, it’s not over until you are left speechless by the duet that Mr Rodrigues has with Samara Joy – on the penultimate son “In Heaven” before the big finish of his postlude “Philip’s Thump” in praise of bassist Philip Norris.

The challenges of producing an album so perfect would seem incalculable, but musical mathematics of a kind is also a gift that Mr Rodriguez has been blessed with – in addition to requiring independent control of four limbs – in support of his keyboard wizardry and sensitive peddling, and drumming, no less – and at least two brains to conceive of this music and execute it to perfection; not to mention to deliver finger- and foot- perfect performances time and time again through the three-quarters of an hour that leave you speechless. If ever there really is an album to die for, then this is it… freshly squeezed “Orange Julius” Rodriguez…