Home Imperatives Ojoyo: Plays SAfroJazz
Morris Goldberg? It’s hardly likely that even many of the musical cognoscenti would not recognise the name – not, at least how, they may recognise names such as Chris Botti and Cyro Baptista. But to set the record straight, Mr Goldberg is the man behind the iconic pennywhistle solo that made the song based on the famous kwela rhythm by Paul Simon “You Can Call Me Al” from his album Graceland. The following video in which Mr Simon and Chevy Chase mimic the soli – Mr Goldberg’s famous one and the not so-well-known-as-it-should-be bass solo by Bakithi Kumalo included – will jog some memories:

Meanwhile… jump-cut to 2022 – or rather 1996 first because this is all about “the real deal” which has always been the music that Mr Goldberg and his friends, Bakithi Kumalo, keyboards-player Tony Cedras and drummer Anton Fig made with the legendary group Ojoyo, celebrated with this back-to-the-future priceless relic from 1996: Ojoyo: Plays SAfroJazz – also featuring the insanely brilliant Brasilian percussionist Cyro Baptista and the now celebrated trumpeter Chris Botti, among several others. 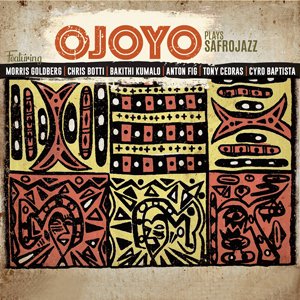 Listening to this music it would seem that everything that Paul Simon wrote and played on his award-winning recording Graceland is derived from this music. Mr Simon admittedly released his famous album 10 years earlier but it is not hard to determine where the inspiration for the melodies, harmonies and rhythms came from. He also was roundly criticised for breaking the United Nations had imposed a cultural boycott on South Africa for its policy of apartheid [Chick Corea also did the same thing when he recorded his own South-Africa-soaked inventions on The Jo’burg Sessions [Electra Musician, 1983].

The original South African repertoire of Ojoyo purveyed on this is the real thing and Morris Goldberg’s penny-whistle pierces the skin of silence like a singing, melodically wailing banshee right out of the gates on “Station Road Strut”, a song so infused with joyful machismo that the very air in the room seems to explode and become agitated as if a million molecules have got up to dance a mad dance of joy. Mr Goldberg – together with Anton Fig, Bakithi Kumalo, Tony Cedras, and with Chris Botti [sounding so much more fulsome and brassy than he does today] and the ever-so-cheeky Cyro Baptista – have carved a niche with an eclectic mix of pennywhistle jive [of course], kwela, liedjie and so much more, as if it had existed in all its sophisticated jive for eons.

So African hi-life rhythms collide with Mr Goldberg’s powerful saxophone sound – he is a virtuoso saxophonist first and foremost – and Mr Botti’s rollicking soli. Songs such as “Forward Motion” and Dolphin Jive” have a rippling jazzy groove that builds under Mr Goldberg’s soaring bopish runs. While on the former we are swept away by the cascading harmonics of the guitar of Dan Carillo. On the former song, the band injects a cinematic quality, launching into a broodingly percussive tumbling groove before a loose and funky close. The sparkle and tenderness of “Little Song” is affecting. And you could almost miss [but shouldn’t] the cascading rhythms of the dreamy-sounding “Cape Doctor”.

“Harare” is a swinging feature written for the jabbering dùndún played by the inimitable Nigerian master-drummer, Kofo, who harmonies with the wheezing pennywhistle, but not before Bakithi Kumalo powers through the bridge and the band brings the house down with the thunder from down under. Cyro Baptista proves that enhance any rhythm section with his wild percussion colours – including this powerful one featuring pianist Tony Cedras, bassist Bakithi Kumalo and drummer Anton Fig.

A slightly different iteration of Ojoyo performs live on “Rockwela” and “Sophiatown Society”. The power and joie de vivre is no less palpable with the marvellous Diego Urcola replacing Mr Botti on trumpet, Richard Cummings replaces Mr Cedras on keyboards and Chulo Gatewood replaces Bakithi Kumalo on bass, while John Guth is added on guitar and Cecilia Tenconi powers through on tenor saxophone. All in all Morris Goldberg and Ojoyo have laid down a marker in gold… an album to absolutely die for…