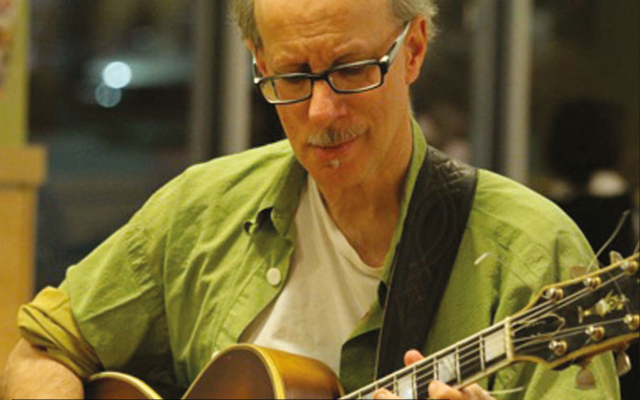 This album of songs, 88, by pianists he admires is Joshua Breakstone’s twentieth recording. Even if he never records another disc – ever – it will matter not quite simply because Breakstone has landed in a truly exclusive place. This is not simply a place where guitarists are edified, but a rarefied realm for musicians no matter what the instrument. He brings with him a rather existentialist view of the instrument, one which is not commonly held by guitarists. “It tends to be a very visual instrument and lends itself to patterns,” he says and one immediately calls to mind the breathtaking melodic geometry of what Breakstone does in his leaping, dancing lines. He also says, “In a way I try to get away from the guitar and into the world where music exists in and of itself, where ideas, articulation and sound exist apart and away from the instrument.” Suddenly one begins to also hear a myriad of voices that sing in a concert highlighted by glorious timbres that he is able to extract from each note played. 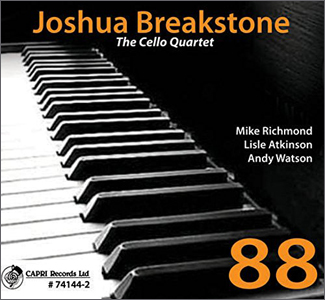 It is entirely possible that Joshua Breakstone can thus do literally anything he wants with a guitar; play music written for any instrument, that is, organically transformed into guitar music. Thus, as if by magic, the guitar begins to co-exist in a quartet – The Cello Quartet – as Breakstone calls it, which also includes the double bass, and drums. Thus you have three stringed instruments – with singular timbres – all played pizzicato in harmony with each other which completely breaks every conception of a string (trio) +drums – for want of a better way to describe this unusual instrumental configuration. (Oscar Pettiford often played cello, but his other cohorts were usually horn players.) Much of what is unique about the sound of the music played by The Cello Quartet has to do with the underlying conversation between Joshua Breakstone and Mike Richmond – guitar and cello, instruments that carry the greater workload of the counterpoint – written or played as maddeningly wonderful cadenzas.

This sequence of compositions written by pianists Harold Mabern, Sonny Clark, Cedar Walton, Mal Waldron, Elmo Hope, Barry Harris and Lennie Tristano – the exception being ‘Eighty-Eight’ written by Breakstone (who may as well be a pianist anyway) – is seemingly built from the conceit that instruments tell composers what to do. Harmonic overtones are allowed to ring free, basic percussion choreography is put under scrutiny; Breakstone scores for ‘a sliding instrument’ or a ‘bowed instrument’…the point being to explore how instruments might behave if the composers didn’t insist on imposing their ‘art music’ upon them. As an example, in ‘News For Lulu’ the heat of Sonny Clark’s bebop piano is systematically filtered and sieved for Joshua Breakstone and Mike Richmond to extrapolate and ‘unmake’ so to speak, only to re-conceptualise it like nothing you have ever heard before. Similarly, mixing earthly equal temperament on ‘voices’ on guitar, cello and bass with a space odyssey of complex tuning ratios that are sustained by dramatically shape-shifting tempi turn Tristano’s ‘Lennie’s Pennies’ over like a somersaulting tumbling box.

Listeners might like to know where they stand with piano composers – especially celebrated ones such as those represented here. Comfort is considered a good thing. But Joshua Breakstone and The Cello Quartet make this music cut right across – and into – the customary stylistic affiliations. The surface of 88 is smooth and logical, like a bank statement, as Breakstone shifts motifs up and down the neck of his guitar (along with Richmond on his cello, and the terrific Lisle Atkinson does likewise on his contrabass). Or is it? At some point an awareness of the ornate geometrical systems that are keeping the whole programme afloat grows, and then we become beguiled by how music shapes affect what the music sounds to us from moment to moment. Joshua Breakstone and The Cello Quartet’s simplicity, it turns out, is a delightfully complex business on 88.

Track List: The Chief; News For Lulu; Black; Soul Eyes; Eighty-Eight; Moe Is On; Lolita; If You Could See Me Now; Lennie’s Pennies.