Home Music Buselli-Wallarab Jazz Orchestra: Basically Baker Vol 2.
In the current commercial environment it is depressing to come across established musicians often obsessed with regurgitating oft-repeated features from the American Songbook. Moreover, what is worse is how many production-line younger musicians tend to foist their own ‘original’ music on the listener, superciliously listing themselves as being responsible for ‘compositions’ and even attempting to impress with odd time signatures. How comforting – indeed refreshing – it is, then, to come upon repertory music by great composers such David Baker especially when the recording in question is Basically Baker Vol 2. This formidable programme is a follow-up to Vol 1 of the Buselli-Wallarab Jazz Orchestra’s Basically Baker. This music, together with that of its preceding volume, is, to a note, a compelling paradigm for composing and arranging for big bands featuring an exposition of the late David Baker’s ingenuity and methods of exploiting timbres of instruments and their relationships with each other in a jazz band, the use of colour and – best of all – our hero’s unique, personal voice in telling a story. 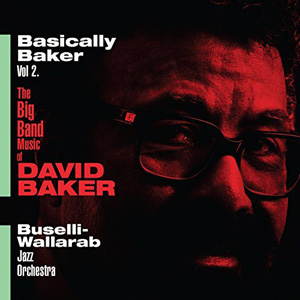 David Baker’s voice was shaped by the trombone, the brass instrument which could be made to sound like one groaning under the weight of wicked oppression, and when set free, roaring like a seraph with wild, irrepressible glissandos and vaunted arpeggios. Adding the cello to his repertoire after a debilitating accident, Baker broadened the scope off his colour palette. Magically sprung from these two instruments David Baker’s music became a cherished prize for the world of the symphony orchestra as much as it was an example of the finest Jazz of its day and the next. Proof of this is on this two-disc set. Reflecting the cascades of emotions that arise from the depths of despair and the unfettered joys of human existence Baker made music that swung and sang, both listlessly and ebulliently as it splashed colours and wove textures into signature tapestries suitable for framing. The Buselli-Wallarab Jazz Orchestra have not only preserved the sanctity of worship at Baker’s altar of originality but also served up a hymnal of worthy versions of Baker’s work for a breviary of real American Standards.

This marvellous package brings a lump in the throat from the very first bars of ‘The Harlem Pipes’, a composition that Baker performed on cello with his 21sth Century Bebop Band, which also featured Luke Gillespie, who reprises his role on piano with a fine, ebullient solo on this recording as well. Of course Gillespie is not the only featured soloist on these tracks. Rich Perry makes his mark on ‘The Georgia Peach’ as well as turns in a stellar performance on ‘Shima 13’ following another impressive performance by Gillespie. Trumpeter Mark Buselli offers a brooding, crepuscular view of ‘Black Thursday’ and the gravitas of Ned Boyd’s baritone saxophone is also mesmerising. On Disc 2, Dave Stryker is absolutely unforgettable as he solos, picking impeccable notes that fall in cascades, into ‘Kirsten’s First Song’. The young percussion colourist Mitch Shiner leaves an extraordinary impression on that song with his own, gorgeous solo on the vibraphone.

Musical re-education should have been imminent when the music of Herbie Nichols was curated by the great Roswell Rudd, who joined forces with Steve Lacy to enshrine the legacy of Thelonious Monk as well. The bassist Buell Neidlinger made an important contribution to preserving Nichols’ repertoire as well. But either memory is too short or we live in an age of rank ignorance and an absolute disregard for musical ancestry; all of which is a dangerous sign. It is therefore fortuitous that the Patois Records imprint of trombonist Wayne Wallace has taken another important step in preserving the musical legacy of an iconic composer – David Baker. Sadly, the labels that exercise a controlling interest on what the next generation of young, aspiring musicians will hear are still asleep at the wheel. It’s time for a rude awakening, but no one is yet sure who will bell the cat.