For centuries the contrebasse – or double bass – has been an ubiquitous concert instrument in the string section of an orchestra, but almost always occupying an almost nondescript position in the grand scheme of things musical despite providing gravitas to musical harmony and rhythm like no other instrument can. Yet, even after Domenico Dragonetti’s virtuoso performances in the 18th and 19th centuries all over Europe, the instrument continued to remain relatively diffident – this despite JS Bach’s stellar displays of “ground bass” transpositions written into various famous pieces of music a century or so earlier. Arguably, it took the music of Jazz to draw attention to the double bass with musicians such from Pops Foster to Wellman Braud and Jimmy Blanton, Arvell Shaw and Oscar Pettiford to Ray Brown and the great Charles Mingus leading the way. 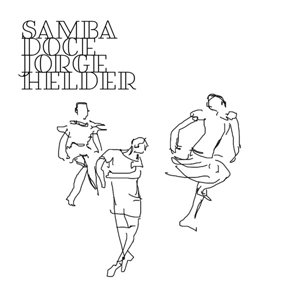 Brasil has had its fair share of magnificent musicians and musical advocates of the instrument. Most notable in recent times have been Zeca Assumpção, Nilson Matta and – in his own quiet way – the virtuoso, Jorge Helder. While Nilson Matta has since made his name in Afro-Brasilian ensembles in the USA of late, Zeca Assumpção and Mr Helder have adorned many great Brasilian ensembles – most notably, albeit at different points in time, those of Egberto Gismonti and Chico Buarque – two Brasilians who continue to make significant contributions to music. Nilson Matta has several albums to his name as leader, but both Zeca Assumpção and Mr Helder continue to edify music and their instrument while remaining largely in the shadows of the concert [and studio] soundstages. This is certainly true of Mr Helder, who – after 40 years – has, only in 2020, released his first recording as leader – the superb album entitled Samba Doce.

The repertoire, comprising original music by Mr Helder is absolutely captivating. These pieces, with a few exceptions co-written by Aldir Blanc and two other notable guests, the marvellous Rosa Passos [whose yearning vocals on “Inocente Blues” elevates the music to a rarefied realm], and the great Chico Buarque are revelatory, and showcase the way in which Mr Helder’s love for, and mastery of the poetics of music – and of song, in particular. This is eminently clear from his artful melodic sense, evident particularly in instrumental settings, in his orchestrations and in the manner in which almost silken harmonies have been melded into these melodies. Of course, the supreme displays of musical poetry shine in the curvilinear rhythms of Mr Helder’s playing itself. All of this makes his contrabass sing in subtle legato pedalling in “Passo o Pronto” and “Inocente Blues”. Meanwhile Mr Helder’s harmonic ideas and conceptions abound everywhere – especially in “Vagaroso” – in the washes of dissonant colour.

But the bassist-leader emerges at his heart-soft and pliant best in the music of music such as “Bolero Blues”, a characterful work co-written by the grand master Chico Buarque, who brings the narrative to full bloom with his questing vocal poetics. This and the slender yet sinewy “Rubato” [also co-written by with his old boss, Mr Buarque] sung by another master of vocalastics, Renato Braz showcase Mr Helder’s empathetic accompanying style along with his song “Doriva” which pays appropriate homage to the legendary Dorival Caymmi, and is sung, appropriately by his son, Dori Caymmi. But the apogee of the album, if one song – and only one song – is to be singled out for special mention – is “Casualmente”, with is the album’s dénouement. It is a song that captures the bounty of fragrant and stirring music to captivating effect.

Throughout Samba Doce one gets a sense of just how fluid and sophisticated the music of Jorge Helder really is – from his playing to his orchestrations. The shifts in temperament from explosive and dancing [in “Samba Doce”] to reflective in the lyricism of the all of the ensuing repertoire, we come face to face with Mr Helder’s genuine and heartfelt artistic sensibility. Throughout the stellar cast – which also includes such illustrious musicians as the magnificent Luis Claudio Ramos, pianists Antonio Adolfo and Marcos Nimrichter, Mario Adnet [who arranges “Doriva”], pianist Renato Neto, reeds and woodwinds master Nailor Proveta, guitarists Lula Galvão [among others] and drummers such as Chico Batera, Jurim Moreira, Edu Ribeiro and Kiko Freitas, Marcelo Costa [all of whom play with distinction]. Best of all is the sense of unfolding drama with radiant orchestral and choral contributions by Orquestra Atlântica, Grupo Boca Livre, and the Orquestra de Cordas de São Petersburgo. All of the pieces seem to fit like a velvet glove because every individual contributor is completely attuned to the masterful vision and artistry of Jorge Helder.