Not many pianists – including those still active today – appear to engage their pianos as if the instrument is a living breathing thing. The late Masabumi Kikuchi – known as Poo [or Poo Sun] by his legion of followers – not only plays his instrument on Hanamichi – The Final Studio Recording as if he is engaged in music with another human being in the sound studio with him. And not simply another human being but one who is his lover, responding to his [Poo’s] subtle, nuanced touch and poignant – often deep – emotions ; one who responds to Poo Sun’s even to soft breathing. Indeed Poo makes the piano sing a song with each note that sounds with the touch of gnarled, and nervy – but gentle – fingers on the ebony and ivory keys. 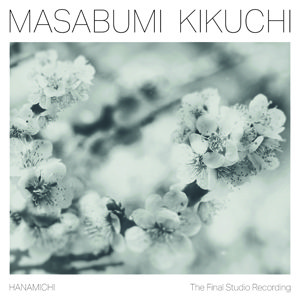 There is no gratuitous virtuosity anywhere on this recording. Rather, listening to this repertoire, Poo’s playing of his concert grand seems like a long dalliance with his avowed lover. The music unfurls like a story told by dazzling pirouettes and impossible twists and flying leaps made by a couple of ballet dancers in the throes of telling of their fervour of their love. Poo begins the set leaping off familiar touchstones – “Ramona”, played with a sense embarking on a quest fraught with great longing. The quest is resolved [as it were] on “Summertime” and then digs deep into the affair on two radically different pronouncements on “My Favorite Things”. In each of the versions, Poo creates iconic versions of a song that will never be the same – just as it became associated with pushing the limits of the mesmerising improvisation by John Coltrane several decades ago. Poo’s set continues with music of his own singular invention entitled “Improvisation” and ends his remarkable sojourn with a meditative, elegiac ballad, “Little Abi”.

This remarkable album was recorded in 2013, two years before Poo passed away. Eight years after it was recorded it remains one of the great musical testaments – a declaration of undying love between a pianist and his instrument. It is also one of those rare, evanescent when an artist is specially graced by his Apollonian Music, a meeting that brings about an inspired set of dancing music unfolding with heart-soft beauty.