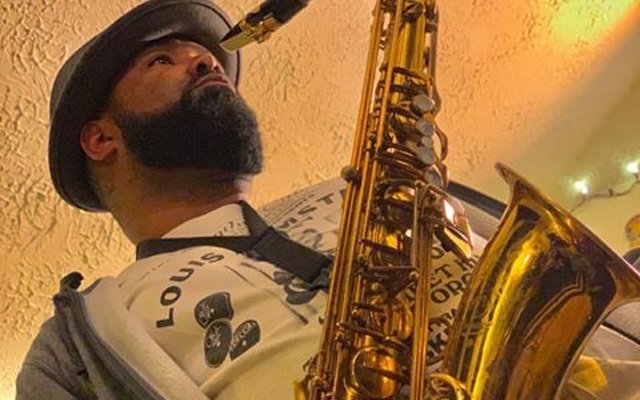 We live in an age of improvised and Jazz music where most young artists try to sound – and often end up sounding – like they are imitating the human voice; not a bad thing, but not necessarily something that advances your case as an instrumentalist because conceptually it ultimately ends up sounding like of a kind. It is refreshing therefore to come upon this recording entitled On! by a remarkable tenor saxophonist named Jordan Dixon. Another aspect that is wholly noteworthy is that Mr Dixon plays the tenor horn exclusively; something that is excellent for developing and advancing instrumental virtuosity and which is, again, something Mr Dixon achieves with great distinction. 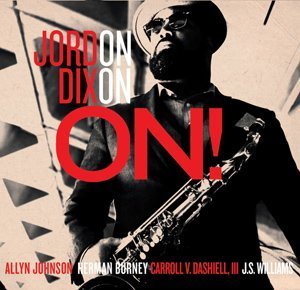 The “remarkable” bit (about this saxophonist) has everything to do with the fact that he recalls the majesty of his instrument in the hands of masters such as everyone from Coleman Hawkins, Ben Webster and Lester Young, to John Coltrane, Pharoah Sanders, Archie Shepp, Sonny Rollins and Wayne Shorter, and, yes, even Albert Ayler, the latter as evidenced on a monumental recording Goin’ Home that he made for the Black Lion label in 1964. By referencing this historic orthodoxy, Mr Dixon is challenging contemporary or popular wisdom that the holy grails of jazz must be signposted with persuasive passion and genuine zeal that is almost completely lacking in most of what you will listen to today – including improvised music and that which is often passed off as Jazz today.

Just as remarkably none of this music is from any conventionally-used songbook including a standards workbook. It is all original work. And the most poignant aspect of this remarkable feat is that it sounds as if it were plucked from the song-writing era that produced those fabulous gems. If this sounds as if one is suggesting this music is “old” and “mouldy” it is not the intention; rather each of the works showcased here is fresh as the day it was written within a fabric of rolling continuity; paying homage in fact, to the forebears of the music in scale, tone and technique, yet each one revealed in a vibrant and questing set, pressed for fresh meaning and with all the virtuoso means that Mr Dixon could muster.

The saxophonist plays every piece with inimitable textural projection, clarity of line, rhythmic rigour and with an overriding sense of expectancy; with elegant gesture and flair. His ballad, ”She Meant It When She Said It”, is performed with eloquence and delicacy. Meanwhile “Lee Lee Dee” features quicksilver contrast, and the lightness of “Notes from the Nook” belies an illuminating inward-looking new voice in music. Elsewhere the songs show that Mr Dixon’s music is sprung from bravura and purpose with periods of elongated and poignant restraint. It’s all the kind of music that speaks to an uncommon mastery not only of the instrument played, but, more importantly, of an understanding that belonging to a musical continuum such as Jazz demands a deep sense of history – both social and artistic.

Mr Dixon shares the honours on this disc with another remarkable young man: Allyn Johnson who has long given notice of his prodigious pianism which is on full display here. Mr Johnson is shares production duties and has engineered and has mixed and mastered this recording; no mean feat by any stretch of imagination. The fact that it is of such a high quality is something else altogether. The rest of the cast – bassist Herman Burney, drummer Carroll V. Dashiell III and trumpeter J. S. Williams are also fully attuned to Mr Dixon’s vision and artistry. All of this makes for a truly memorable recording.