Home Music The Stan Getz Quartet: Getz at The Gate

This extraordinary recording, Getz at The Gate sub-titled Live at The Village Gate Nov 26 1961, was – we are told – canned for nearly 58 years and one can only assume that the tenor saxophonist Stan Getz, who was at the height of his powers (and popularity) during the time it was recorded, was in his Brasilian orbit . The success he had begun to attain with this band that was almost immediately surpassed with the group he formed four months later. That group included Charlie Byrd, Gene Byrd, Keter Betts and Buddy Deppenschmidt (and Bill Deppenschmidt Sr.) and with the recording Jazz Samba (MGM/Verve, 1962) Mr Getz’s reputation experienced a near-atomic explosion. 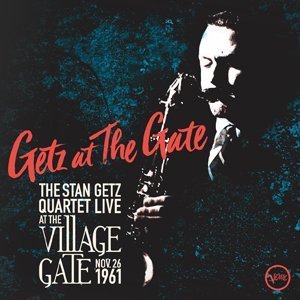 The rest was history. However, with its 2019 release, one is introduced to a group that included the inimitable pianist Steve Kuhn and a phenomenal bassist John Neves who joined Mr Getz and the great drummer Roy Haynes to produce what is easily one of the great treasures in recorded Jazz. Actually the recording began its life as a riveting concert at The Village Gate where Mr Getz is on song. In 1961, Mr Getz, who had already burst on the scene playing with guitarist Johnny Smith on Moonlight in Vermont (Roost, 1952), brought this group together and was unbelievably just 34 years old; a time in his life and playing career when he had come through the influence of Bebop and has headed into the realm of Bossa Nova. Fortuitously (for us today) there was a holdover in a lounge somewhere in between Bebop and rest of mainstream Jazz.

With a quartet that was fully attuned to his vision and artistry Mr Getz played this concert like a poet of the tenor saxophone, his tone warm and gushing, full of the mighty glissandos whish graced his melodic lines. He played fast, medium-fast and slow, seeming to caress each melodic line as he breathed into his horn intoning with a velvet voice. And you can hear it in every song here, which is played by Mr Getz with a momentous force that alternates between breathtaking – almost ferocious – intensity and quiet lyricism, each melodic variation following the other quite inexorably, his sumptuous tenor sound brilliantly caught in this live recording. There is an unhurried approach, a lived-in character to Mr Getz’s phrase-making that remained the hallmark of his fluid style which, through the years exchanged the brimstone of youth for the well-honed values of experience.

Pianist Steve Kuhn “sings” on “Like Someone in Love” (and elsewhere) even as he plays mighty boppish clusters. Drummer Roy Haynes is masterful at every step, exploding – as was his wont when he soloed – but always playing deep in the pocket so that musicians could go to the moon and back and the drummer would be there swinging a welcome as they got back from their respective excursions. Meanwhile Mr Getz is brilliant as he seductively bends the notes in “It’s Alright with Me” and “Stella by Starlight” and is matchless as he sculpts the long inventions on “Jumpin’ With Symphony Sid”. Everywhere it’s clear that there’s not a semiquaver that hasn’t been fastidiously considered. This is Stan Getz at his best on repertoire that features beautifully crafted arrangements of beguiling variety and sensuousness; on a double-disc to die for.