Home Music Jon Cowherd: Gateway
Of the plethora of reasons to marvel at Gateway by Jon Cowherd with Brian Blade, Tony Scherr and Steve Cardenas, the greatest of all is the fact that it is music written by Mr Cowherd to celebrate his instrument, and its (and his) repertoire. All eight pieces are masterpieces and his three “Improvisations” that have been sprinkled through the composed sections of this work represent profound summations of his work up to this point. They also remind us that the crucial thing to remember when listening to these one and two minute-and –then-some works is that every note ever written for the piano – both here and elsewhere – was written with himself in mind; and is an expression of Mr Cowherd’s independence and self-reliance upon his own genius. Colour is an attitude; texture is the basis for an internal argument and articulation is that very argument, engaged here with guitar, bass and drums. 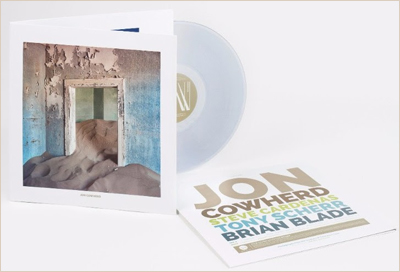 the instrument – seem, in their astonishing colours, to “suggest” that the range of notes has been extended by at least an octave and a half. Moreover in “Wandering Heart” it would seem that the sustaining pedal has been developed anew. Side B begins with “Warriors” which melody features counterpoint where the (melodic) lines between piano and guitar seem to be appropriately at loggerheads with one another. This emboldens the narrative, as Mr Scherr’s rumbling bass is softened by Brian Blade’s sculptural work, so delicately wrought on drums and cymbals.

Side B continues with “A Beautiful Something”, so named it would appear, not only for the ephemeral nature of the music contained within but also for the fact that such beauty as its melody can hardly last after the final notes have faded and died. “Piano Improvisation #2” – the shortest of the three “Improvisations” seems to acknowledge that the state of Mr Cowherd’s modern art is contiguous with its ancestry while the same wonderful pianistic syncopations herald the future. Jon Cowherd then takes a small step back on “Braun’s Bronco” allowing guitarist Steve Cardenas to have his lyrical say with Brian Blade’s drumming like a metronome gone quite mad, together with the sobering reality of Tony Scherr’s bass for company.

The album ends on an appropriately “lose” note, with the introspective-sounding “Improvisation #3”. It is a dreamy, melancholic piece with trills and steadied by a sobering left hand. Together these hands of Jon Cowherd appear to be conferring upon this improvisation a sort of quasi una fantasia (Like a Fantasy) label instantly differentiating it from relative weight and formal structures of the other written pieces heard before it. The piano of Jon Cowherd also thrives because its gorgeously round tone yet clear tone has been exquisitely captured by Marc Urselli, mastered by Alex DeTurk and produced by the hugely talented Elan Mehler on vinyl for the iconic Newvelle Records label.