Home Music Kevin Hays & Lionel Loueke: Hope
Hope by Kevin Hays and Lionel Loueke, with writing credits virtually split down the middle announces an album by two songwriters of preternatural abilities. Even the sketchiest listen to the album will reveal music of incredible simplicity and sophistication. Both musicians also share vocal glories but in each instance neither piano, nor guitar is a mere accompaniment to each singer, but both instruments are protagonists in their own right, seemingly playing a critical part in the creation of the emotional drama that unfolds ever so gently across each of the four songs on each side of the vinyl. There is, as well, always the right balance between piano and guitar, and between Kevin Hays and Lionel Loueke who dwell in a poignant emotional centre of gravity of each song.

In another realm the transcription of the notes of each piece reveals a kind of lyric poetry that is rare and beautiful even for instruments – the piano and the guitar – celebrated for their lyrical characteristics for hundreds of years under such masters from Chopin and Liszt, Corea and Jarrett; and from Segovia and Bream, Christian and Baden-Powell. In the wrong hands any and all of this outwardly simple songs can sound uninteresting, even formulaic, but Kevin Hays brings out all their delights as in “Violeta” and “Milton”. 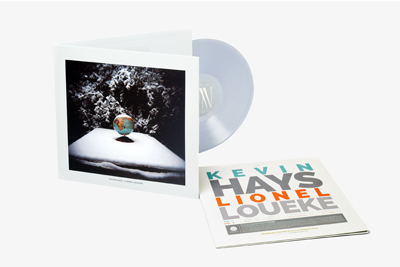 His delicate phrasing creates a feeling of innocent melodiousness, yet each movement is intelligently worked out and the subtle manipulation of timing and swing conveys a strong sense of the playful and quick-witted compositional approach.

Lionel Loueke, for his part, gives a fresh and much-needed lease of life to his instrument, accompanying himself with his unusual vocalastics as he goes along and makes his guitar sound as if it were a human being, a partner in life. Mr Loueke reveals that – voice and all on each song – his guitar has a huge vocabulary of sounds and effects, combinable to make it sound as big as an ensemble. But this takes all his insight and guile to deploy effectively. They range from harmonics and pizzicato to technique exotica such as “nut-side”, “nail-sizzle” or “bi-tone tapping” (plus a battery of percussion possibilities; every now and then one senses that Mr Loueke’s guitar comes with a drum set attached). Add to that his vocalastics and you have a veritable orchestra.

Both Kevin Hays and Lionel Loueke can deliver briskly driven performances as we have seen from individual recordings done by the pianist and the guitarist on other occasions. And their firm, burnished tone on these exquisite instruments is especially well-suited to this repertoire and its recorded excellence under the magical wand of Marc Urselli and Alex DeTurk, with Elan Mehler in the Big Chair. But it is the steely lyricism, perfectly suited to the playing of these songs also comes with interpretations that have a degree of grit beneath the filigree surface and it all sounds so marvelous on this Newvelle vinyl.