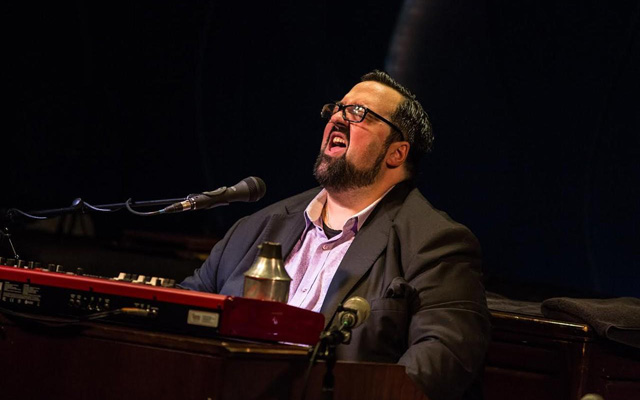 With every record that he makes Joey DeFrancesco raises the bar on the Hammond organ that much higher for even the most talented players of the new generation. Project Freedom is no exception. It’s probably true that DeFrancesco doesn’t really mean to do that. It’s just that he has the fingers of a Merlin when it comes to those heavy-laden keys. And even if Corey Henry is deemed to be the hottest ticket in jazz today, Joey DeFrancesco is probably still the go-to guy when it comes to the Hammond B3, not the least because few organists can imbue every note with that heady mix of preacher and funk-master.

The only time – and that too, those times are few and far between – when Joey DeFrancesco can come apart is when he, head thrown back and eyes closed, launches into one of his mighty and seemingly unending , capricious runs. Happily on Project Freedom his is more circumspect, without really being mealy-mouthed with his flair for those dazzling forays up and down the keyboard, played at a scorching pace. 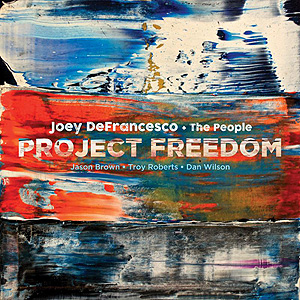 This feature of Joey DeFrancesco’s playing on this disc has been co-opted by the Dan Wilson, whose sizzling fretwork is simply awe-inspiring. Add to that the rolling thunder of drummer Jason Brown. And then there is Troy Roberts, the saxophonist who ignites the music with the peripatetic roar from his tenor.

Consider how, with the emphasis on break beat drumming (Brown) and thrumming bass lines (DeFrancesco) the group lights a blue flame to the Spiritual “Lift Every Voice and Sing”, with Roberts and Wilson shaping the anthemic, architectural music that ascends heavenward, constantly finding resolution in the rarefied realm there. This is a definitive, exhilarating rendition of the iconic hymn complete with rousing organ and pounding drum line evolving from the melodic line. “One”, which follows, is full of wonderful things trumpet from Joey DeFrancesco and it even begs the question: When will Joey DeFrancesco make a trumpet album?

But then this dreamy bubble is soon obliterated by a “So Near, So Far” featuring glorious tenor saxophone and short, heady organ breaks. Sam Cooke’s classic, “A Change is Gonna Come” is deeply introspective, with a loose tempo, bluesy runs and soaring organ interludes. With Troy Roberts standing in for Sam Cooke, the tenor saxophonist tears up the choruses he plays in framing each with his searing uncompromising solo style. Add up the gifts brought to the altar of creativity by Joey DeFrancesco and you have a truly unblemished album.

When you add up the fact that Troy Roberts, Dan Wilson and Jason Brown light a proverbial fuse lit under every song only to fire up Joey DeFrancesco the bar soars heavenwards yet again on the wings of gospel and a song in one of the finest, hippest records in the discography of Joey DeFrancesco.