Home Music Alyssa Allgood: Out of the Blue
Rich in characteristically rhythmic and involving vocalese, Out of the Blue by Alyssa Allgood is easily one of the most exciting performances by a singer in a long, long time. This is a work with a breathtaking momentum that never loses its “composerly” way from its very beginning. Alyssa Allgood seizes upon the drama of each of the songs and, using Eddie Jefferson and Jon Hendricks – with Dave Lambert and Annie Ross of course – as leaping off points to make remarkable flights of her own, and with good taste supremely swinging rhythm.

Anyone who knows the difficulty of negotiating vocalese will appreciate obligation to marry precision of timing with storytelling and then framing the vocals in such a way that they become as interesting as the improvised solos of one of the instruments; only in this instance, to steal the melody away from the tenor saxophone, or the harmony from the organ, and the rhythm from the bass or drums. A gifted singer turns this into highway robbery of sorts, stealing from everyone in the band. 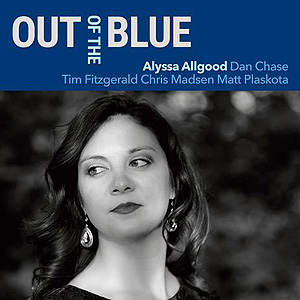 Alyssa Allgood proves to be both a kind of “Bonnie” to the “Clyde” played by saxophonist Chris Madsen as well as Tim Fitzgerald’s guitar, Matt Plaskota’s drums and Dan Chase’s Hammond B3.

There is also no doubting the classiness of Alyssa Allgood’s leaping off point: 1950s Blue Note recordings by Wayne Shorter, John Coltrane, Sam Rivers, Horace Silver, Joe Henderson, Bobby Timmons, Lee Morgan. And her vocalastics no matter what she touches turn into pure 24-carat gold. And Allgood delivers each of these nuggets through intricate passagework, with unruffled ease and an alluring mellow tone. The manner in which she shadows the magnificent Hammond B3 solo by Dan Chase on Horace Silver’s “Peace” is spectacular – first in the almost ghostly presence throughout the solo and then leaping off it onto a whole new plane just after chasing it down. On Joe Henderson’s “If” she literally steals the solo from Chris Madsen from right under his very nose.

All of this is in good humour and the musicians give back in like manner, raising their own soli to greater heights, which in turn invites Alyssa Allgood to run the gauntlet all over again, this time chasing an even greater challenge. On the slow, seductive Bossa Nova of Lee Morgan’s “Only a Memory” Alyssa Allgood turns on the seduction and has the musicians – and surely the listener as well – eating out of the palm of her hand. You’ll even forget the superb solo by guitarist Tim Fitzgerald, falling in with Allgood as she slinks after the Hammond B3 once again. If this were “Jazz” opera, Alyssa Allgood would be its principal character conveying its glamour in the grand manner.

Track List: Watch Me Walk Away (Dig Dis); Noticing The Moment (Moment’s Notice); It’s You Or No One; Speak No Evil; Beatrice; Peace; If; Only A Memory (Ceora); Moanin’; Mirrors.