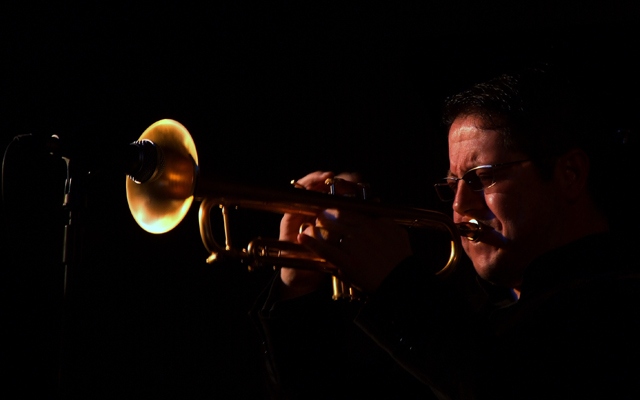 Butte, Montana is not a place you would normally associate with a trumpeter. But Jim Rotondi is a rare bird; rare enough to come from Montana, a meadowlark whose song seems to have informed the beauty of his playing. Something else also informs his music and that is the wide swathe that he has cut from globetrotting on a cruise ship to exchanging the proverbial milk teeth for gleaming permanent ones in the rough and tumble of the world’s toughest place to make it: New York. But Rotondi hides this well, letting his softer side show. Make no mistakes, however, Jim Rotondi is a premier trumpeter, bred on a feast of Freddie Hubbard, Woody Shaw and Bobby Shew and from the echoes of this deep wellspring comes a singular voice. 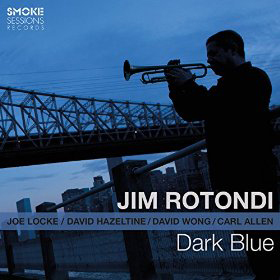 Rotondi’s recordings and performances at Cory Weeds’ Cellar Live and the erstwhile club, the Cellar in Vancouver, British Columbia are a joy to recall. It seems as if you simply put Jim Rotondi in front of an audience and he shines like a diamond. This recording at the Smoke – the new best thing to happen to music, it would seem – will surely leave you in a swoon. The repertoire has been flawlessly chosen. And Jim Rotondi could not have chosen a more perfect ensemble to express it. David Hazeltine’s fluid lines and his own breathtaking harmony is masterfully harmonised by that of vibraphonist Joe Locke. Hazeltine’s beautiful song ‘Highline’ is a classic example of how a powerful player (Locke) can nestle cheek-by-jowl with a pianist with such soft articulation. Have Jim Rotondi leading the charge David Wong grind the growling rhythm and the great Carl Allen wizardry dazzle on the drums and… what more could you possibly ask for.

Much of the music is either composed solely by Jim Rotondi by himself. But the performance also features charts by other musicians. One in particular is ‘Biru Kirusai’ which is full of wit and charm. It is time to remember Eric Alexander, with whom Rotondi enjoyed some pretty memorable moments. And then there is the classic Monk ballad ‘Monks Mood’. Rotondi’s arrangement features mostly Thelonious Monk’s writing with a few harmonics by the trumpeter thrown in there. I hear a Monk tune, but I also hear Rotondi here filling in for the great Charlie Rouse, virtually Monks doppelgänger. Rotondi is absolutely sublime on this chart. The gorgeous Leslie Bricusse/Anthony Newley chart ‘Pure Imagination’ is pure magic. Listen to how Carl Allen responds to the music with pure magic.

Jim Rotondi may be an acquired taste to some. He plays relatively few notes, solos for a relatively short period of time. He does not try and bedazzle listeners with pyrotechnics that many of his contemporaries do. But listen carefully to his playing and you will hear notes that dally in the air like dewdrops falling in slow motion onto freshly proffered slender blades of grass. He bathes in the tonal colour and texture of the notes. And you can feel (but not hear) the luxurious intake of breath as he makes a precisely right note come from the bell of his horn. The monumental jazz giant Charles Mingus once had high praise for the great Clarence Shaw, who played all-too-briefly in his band for the exactly that kind of playing. Mingus also called Thad Jones ‘Bartok with valves’. Somehow I do not think that Jim Rotondi would have also earned the Charles Mingus’ respect.