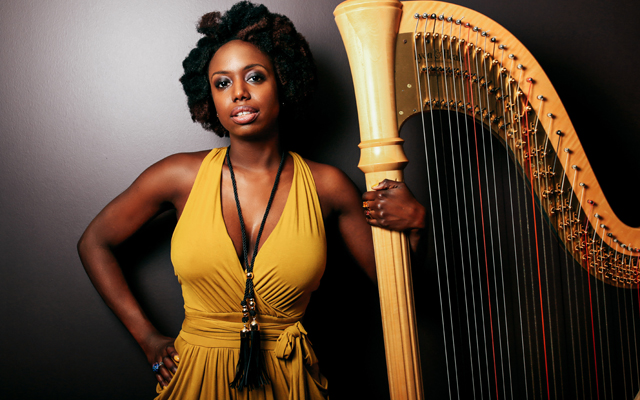 To speak of Brandee Younger in the same breath as Alice Coltrane and Dorothy Ashby somehow does not seem such a stretch. The young concert harpist’s music is set alight by her bristling genius for invention and technical wizardry. Moreover she has extraordinary pedigree, following from where Coltrane and Ashby left off. While Coltrane and Ashby – like Jimmy Blanton on bass – brought their instrument into the forefront of the jazz ensemble, Brandee Younger has taken it further afield inventing new architectural structures and – like Alice Coltrane and Dorothy Ashby – even imbuing her dazzling runs with whispering vibrato, soulful peddling inflected with perfectly placed blue notes. That’s probably why if you thought that Brandee Younger appeared to be born with a musical maturity that was far beyond her years, you would not be very far from the truth. 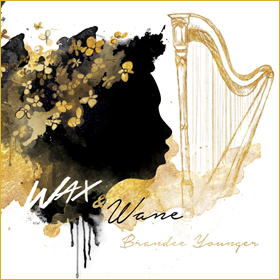 Brandee Younger’s 2016 disc Wax & Wane features a marvellous performance by a truly great young artist. It brings the otherworldly beauty of the concert harp with the visceral excitement of jazz. Labels are odious and nowhere do you find this more obvious than with younger musicians such as Brandee Younger. Her music offers a banquet of many delights from the hauntingly exquisite ‘Soul Vibrations’ to the gutsy and rhythmically extravagant ‘Afro Harping’ and the profundity of ‘Wax and Wane’. And there is a midnight glow about ‘Ebony Haze’ and ‘Black Gold’ both of which make proud and relevant social statements. There is also a distinct feeling of Black Pride here and it is ‘sung’ with grace and extraordinary splendour.

I would be remiss if I did not have anything but a glowing tribute for Anne Drummond. Her magnificent, shadowy presence turns up the heat on this recording. Her flute often sounds dark and beckoning. Her articulation is spotless and she brings rich tonal colours to her playing. The contrapuntal exchanges between Younger and Drummond are absolutely mesmerising. They intertwine as if each was mimicking the DNA of the other as they twist and turn, dancing around one another like a double-helix. And this happens throughout the recording. This is power duo like few others. You never can tell what surprises they have in store for you and that in itself is one of the finest aspects of the ladies’ performances.

Production values also deserve special mention here. Musicians seem hand-picked for the sound they will bring to the songs. There is almost a rich symphonic feel to this disc, not merely because of the harp and flute but also because of what the great lines of tenor saxophonist Chelsea Baratz and guitarist Mark Whitfield bring to the music. Dezron Douglas and Dana Hawkins do more than just hold down the rhythm section, but play melodic roles as well. And the recording is superb. This is an exciting disc one on which Brandee Younger elevates the concert harp to a rarefied realm.