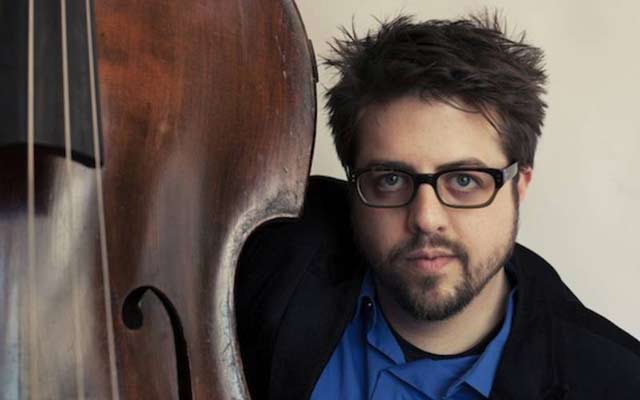 These unfailingly excellent performances of music that is both familiar and relatively unfamiliar provide plenty of evidence to explain why Jeff Denson is a worthy exponent of the bass and a fine leader of the small ensemble, and why the great Lee Konitz can get together with this young man to create music. The first thing to note is that Mr. Denson never engages in the kind of exaggeration which some bassists use to define their identity and how well this unusual aspect of his character is woven into Lee Konitz’s dry, though thoroughly idiomatic, rhythmic delivery. And if you think that the first bass not under the opening solo doesn’t sound plucky enough, you need patience; the long sweep of heterogeneous material throughout the record is convincingly sustained. 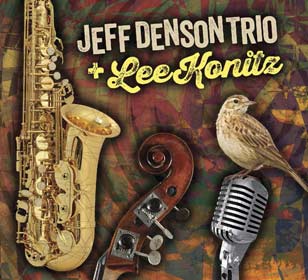 Jeff Danson has a classic musicianly demeanour as a bassist. His choice of notes is inspired and because of this his lines are filled with wonderful twists and turns, surprising leaps and gambols. His dramatic inversions – especially in Lennie Tristano’s pieces are sublime. You don’t often hear younger bassists play in a manner so self-assured as to celebrate their instrument through profoundly distinguished output, played in ensemble as well as solo settings. This sits exceedingly well with Lee Konitz’s playing, which is cool, where energy and refinement blend in ideal proportions and where there is always a sense of beguiling the ear and holding its attention to draw the listener into an inventive, interior soundscape.

The brilliance of these two musicians – and indeed the pianist and drummer as well – is borne out by the treacherous difficulty of the music on this album. Don’t be fooled by recognisable charts such as “Body and Soul” or “Skylark”. These may be familiar tunes, but they are far from “easy” to play – and they are certainly not easy to play as brilliantly and with such personality as these musicians do on this record. It is a measure of the genius of the musicians to be able to create a musical experience constructed from a few standard devices and then embellish them to the heart’s content, limited only by the imagination, good taste and instrumental technique.

And then there is the work of Lennie Tristano, seemingly perfect for this setting in which Lee Konitz and Jeff Denson duel. In the hands of such genius, the music is unfailingly ebullient and diverting, and often through the piece(s) considerably more than that. It is a measure of Jeff Denson that he is able to answer the formidable demands of Mr. Tristano’s music. And yes, he does so because he has the technique and dexterity in spades; but he also understands how to make the most of Mr. Tristano’s writing in an interesting manner. And when it comes to pure musical stillness such as in the finale of the record, the gracefulness of the playing is noteworthy.

So big thumbs-up for Lee Denson and his trio – and, of course for Lee Konitz words of praise seem redundant. The vocal parts are marvelous too. But this is a musicians’ record, make no mistake about that. For all of the reasons mentioned here as well, this album is also one of the more scintillating albums of 2015.

In the current jazz environment, the art of jazz expression and the world of formal education are fully intertwined. Serious dedication to either path takes powerful commitment, but fully pursuing both demands a level of diligence and focus that is immensely challenging. Jeff Denson is a man who is meeting that challenge. Fully immersed in both worlds since the late 1990s, the bassist/composer has balanced a full career as sideman and leader while taking a full course of studies leading to his doctorate. Read more…