Only an ambitious and maverick performer would continue to purport that jazz is not an idiom or a style, but a process andrelease a disc of unfamiliar music. And when it turns out that this aptly titled disc consists of pieces for solo instrument only, one might start to question the sanity of such a venture. 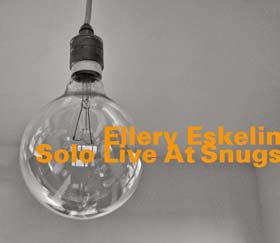 But you needn’t worry when the performer in question is so completely in control of the expressive and technical dimensions of his instrument and its repertoire as Ellery Eskelin. Add to that the musical topography that this album covers – the crests and troughs of tone colour and the exploration of timbre with nuanced and infinitesimal changes in density and tempi and suddenly one begins to get a much clearer sense of what this recording is all about.

The breathtaking spirit of the four pieces set down on record here should then come as no surprise to both those familiar with Ellery Eskelin’s work as well as to those who are getting to know it for the first time. From the start of “Turning a Phrase” you become privy to a world where nothing is sacred. What appears to be improvised might well be programmatic and what appears to be programmatic may also well be improvised. It is, of course, all in the greater scheme of things, remember? This music is a “process” after all. Yet the edgy, unsettling opening track also shows that there are many sides to Mr. Eskelin.

Some resolution might come into being in the three remaining tracks. There’s plenty of variety here achieved in no small measure by a musicianly mind that knows no boundaries and whose aesthetic is dictated to him without precedent. Such is the originality of the thinking and the ideas. And to those who continue to insist that music is not a succession of ideas, but a progression of notes and narratives, Ellery Eskelin does not simply break that mould so much as destroy it completely.

So what makes this recording so special? What ultimately does the trick, if you wish, is an ability on the part of Ellery Eskelin to bring to life the music in such a vivid and colourful way. This is music that manages to peak very clearly without the necessity of narrative and Mr. Eskelin’s recording does much to reinforce this view.

For the past thirty years Ellery Eskelin has been at the forefront of the global creative improvised music scene. Based in New York City, he has traveled widely performing, recording and amassing a very personal and iconoclastic body of work. And yet Ellery Eskelin has always remained deeply committed to the traditions of jazz and American music. Eskelin embodies this seeming contradiction with ease. He does not see jazz as a style or idiom but as a process. Further, a process of creative development that has great relevancy to our time. In this pursuit Eskelin consistently delivers to the listening public unadulterated, passionate music with no excuses and no apologies. Read more…