The attempts to define great Jazz and other American music has long been the pursuit of pianist Frank Carlberg and the tenor saxophonist Noah Preminger and this journey continues on Whispers and Cries. Popular American stage and film music – the so-called Great American Songbook, as it is often called – has been on a sustained intravenous drip ever since the Jazz musician has uplifted some of its greatest works through interpretation. But the Jazz musician is not the only one who has ventured to revisit this songbook; others have done so too. Still Jazz – or Black American Music – played by Black musicians has breathed an eerily authentic life into, for instance, the music of Gershwin’s Porgy and Bess, whose characters are, of course, black. And while “Try a Little Tenderness” is an exquisite elegiac ballad in the hands of an accomplished musician, it can become a blues standard in the hands of a great black Jazz musician. Just as after Bobby Troup’s “The Meaning of the Blues” which was famously recorded by Julie London on her About the Blues, became a classic in the Miles Davis version on the album Miles Ahead (Columbia, 1957). 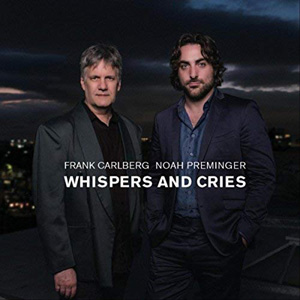 Neither Frank Carlberg nor Noah Preminger is black, but they play Jazz and they do it exceedingly well. And the reason for this is not because they “have the blues” and have “paid their dues” just like Thelonious Monk and Charlie Parker or Sonny Rollins did, but because they have the unique ability to get to the dead-centre of the emotional heart of music. Once there the feeling of the music surges in their respective artistic beings and emerges as a unique musical expression, unlike none other you will have experienced before. This is what has made Mr Carlberg’s Shadows and Reflections (Red Piano Records, 2015) and Monk Dreams, Hallucinations and Nightmares (Red Piano Records, 2017) so special and what has also made Mr Preminger’s Dark was the Ground, Cold was the Night (Independent, 2016) and Meditations on Freedom (Dry Bridge Records, 1027) touchstones in the interpretation of the the authentic Black American expressions: Blues and Jazz.

The distinction is significant and important simply because no one can play Thelonious Monk like Thelonious Monk and no one can play “Someone to Watch over Me” quite like Oscar Peterson (for instance). It is also the reason why you will not hear this music played with quite the same poetry of emotion as Frank Carlberg and Noah Preminger do on Whispers and Cries as it is not a matter of instrumental virtuosity or “learned” harmony. It is simply a matter of feeling that gets to the emotional centre of the music and this is what makes the music so compelling. For instance, Mr Carlberg’s and Mr Preminger’s melodic relationship throughout the music of “Someone to Watch over Me” seems to spring from one that describes great Schubert Lieder where vocalist and pianist negotiate a dramatic interpretation from a section of Winterreise with Mr Preminger playing vocalist in this improvised duet.

Perhaps the analogy of Lieder can be applied to almost all this repertoire and it might well stick because of the spectacular manner in which Mr Preminger and Mr Carlberg negotiate this exquisite music. On George Gershwin’s “Embraceable You”, for instance, Mr Preminger’s lustrous, moist tenor saxophone gushes through the melody with something bordering on devotion. Mr Carlberg is no mere accompaniment to Mr Preminger but a protagonist in his own right, playing his part in the creation of this emotional drama. Through the music – all of it – you “feel” the nuanced feelings of the characters in each narrative, sensing every minute fluctuation of mood; every changing emotion which builds through the defining moment of each song before it is resolved in sadness or joy, life or death in the dénouement of each piece. The songs are crafted to respond to singular interpretations defined by Mr Preminger who can strike the right balance between “instrumental” characterisation and “vocal” beauty, and equally so with the pianist, Mr Carlberg who, additionally, knows when to step into the limelight and when to withdraw. In effect both musicians bring their “big” dramatic voices together with a wide range of colours which are employed time and again with wonderful control, often with serene beauty.