Home Music Jass: Mix of Sun and Clouds
Is there a greater musical treat than sitting down to listen to Jass run through the repertoire of Mix of Sun and Clouds (well, apart from being by a stage somewhere while they actually perform it all for you)? Yolk Music’s disc does treat you to the former, while tricking you into feeling you’re near that invisible concert stage, thanks in large measure to Andreas Stoffels marvellous recording as well as to excellent mixing and mastering on the part of Dave Darlington (whose name may, of course, be more familiar to the cognoscenti).

However, it has much more to do with the rippling thunder of Sébastien Boisseau’s double bass mixed in with John Hollenbeck’s drums, as Samuel Blaser’s trombone gives a yearning, wavering cry and Alban Darche announces “Roman I”, with powerful, glamorous tone, gleaming at the top of the tune before turning throaty and rugged down at the bottom. Jass brings off the first movement of “Romans” in a single, almost messianic, lyrical sweep. Everyone shines here; listen to the chiming delicacy of Blaser’s short burst close to the middle of the movement. 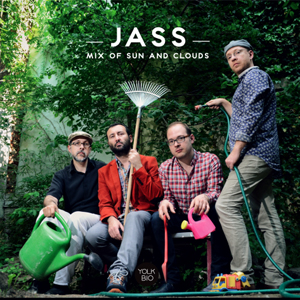 Darche – whose work it is – signs on with his singular commitment too. In the mercurial, folk-dance-like flare-ups of “Ansia da Separazione” each member of the band plays with such fiery intensity that the music seems to shake as if possessed.

Even in the stratospheric, Messiaen-like misterioso of bassist, Sébastien Boisseau’s “Lony Ay Utca” the group’s focus is absolute. And yet I was left with a slight feeling that somehow the quartet weren’t so surrendering to the folk-spirit in this music as summoning it up by sheer force of will – certainly when compared to the spontaneity and animal instinct of, say, “It Began to Get Dark” from the January 2012 recording Jass. But to be fair, the only serious caveat is that the individual sections of the two “Roman” movements aren’t listed (although the two movements are separated by seven other pieces); but by the end, who’s keeping track? No one really…

These are engrossing performances by some of this century’s most original voices in music. Not that these players are unduly fixated on form. There are nine wayside delights on Mix of Sun and Clouds and each from Jass’ deadpan payoff on “Roman” to their spacious phrasing in something like “Bio”. In short, these performances offer more with each listening. The absence or booklet notes enable intense focus on the music, which is helpful here, as the music speaks louder and with eminently more significance.