Home Music Eucalyptus: Pink Flamingo Room
In 1646 Sir Thomas Browne coined the term “hallucination” from the Latin word “alucinari” meaning “to wander in the mind”. I prefer the Latin (and Browne’s) word to another term often used instead: the term is “psychedelic” and is derived from the ancient Greek words psychē (ψυχή, “mind”) and dēloun (δηλοῦν, “to make visible, to reveal”), or “mind-revealing”. And I do prefer “hallucination” – certainly while emerging from the Pink Flamingo Room a 10″ 45rpm EP by Eucalyptus because this music facilitates a sort of “wandering in the mind” without disturbing it to the extent that something is changed, much like a trip through a Ripley’s museum: you come through relatively unscathed, unlike John Lennon’s rather psychedelic “Lucy In The Sky With Diamonds”.

Happily the music of Pink Flamingo Room by Eucalyptus is just as exciting as that iconic Beatles track. The music of “Jazz Visions” and “Have You Listened to Mermaid Tattoo?” includes, among other things a fantasy of extraordinary breadth and visceral energy. In fact these two qualities also permeate the rest of Pink Flamingo Room, which I don’t hesitate to suggest is among the finest I have heard lately. One of the more striking aspects 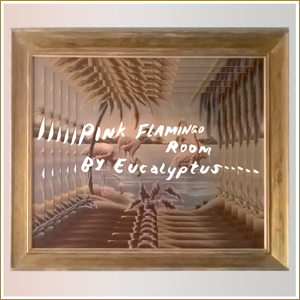 of Brodie West’s approach – indeed of the rest of Eucalyptus, especially Nicole Rampersaud – is his inerrant sense of timing. There is no rush to arrival: every scintillating detail is savoured at leisure, without a trace of decadent indulgence.

Lyrical passages, so often sunk by the weight of misplaced rubato, here speak with an earnest ardour, lending them a disarming, youthful freshness. That said, tempos are amply pliant and rubato, when applied, is richly luxuriant. The rhythmic spine of the material always remains intact, so the rhetorical thrust is never lost to detail. (Chalk that up to Ryan Driver, Michael Smith, Blake Howard, Evan Cartwright and Nick Fraser, of course). The black dots from the score-sheets disperse into the air like pungent incense. Shapeliness characterises “Pink Flamingo Room”, its opening declamations bold and square-shouldered rather than strident and the band’s apt realization of “Hamilton” is richly imaginative and a celebrated closing if ever there was one.

One must add that Dr Leo E. Hollister the legendary clinician and biomedical scientist recognised nationally and internationally for his numerous contributions to the ﬁelds of psychiatry and pharmacology once posited that: in proportion to other effects, changes in thought, perception, and mood should predominate; intellectual or memory impairment should be minimal; stupor, narcosis, or excessive stimulation should not be an integral effect; autonomic nervous system side effects should be minimal; and addictive craving should be absent. In other words according to Hollister’s qualifications and apropos of this recording by Eucalyptus having a “hallucinogenic” effect…

Here’s a record – Pink Flamingo Room – by Eucalyptus that is mind-bending, produces minimal stupor, narcosis and/or minimal system side effects on the autonomic nervous system. Now, about that addictive craving…

Track list – A1: Pink Flamingo Room; A2: Jazz Visions; B1: Have You Listened to Mermaid Tattoo? B2: Hamilton

Brodie West and Eucalyptus at The Tranzac, Toronto (Probably November 2013)