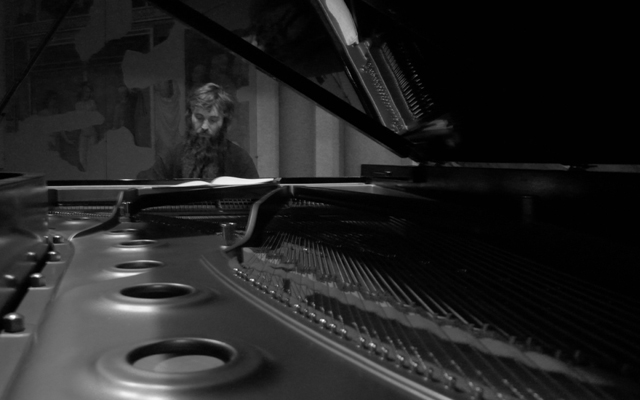 At this concert in Genova the pianist Jamie Saft shows off his stripped-down, contemplative side, dwarfed by an enormous concert grand. But swathed in the echo of pedal his music is luscious, rhapsodic and indicative that we are only now beginning to hear (and see) this prodigiously gifted musician being put through his paces. Appropriately using the forum of his solitary instrument and an intellect all-but emptied of preordination, yet loaded with precognition and presumption we find a pianist seemingly floating on air and gushing with ideas. 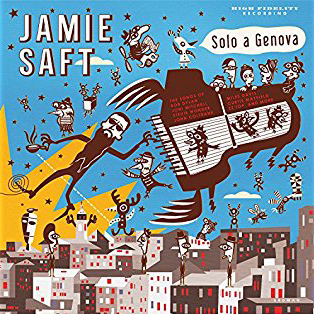 His “Blue in Green” is one of the best places to be on this James Joyce-like “stream-of-consciousness” performance. The Bill Evans classic (yes, it was Bill Evans and not Miles Davis who was responsible for it) is not only unrecognisable, but seems to have been made up on the spot with a simple line that turns dramatically and beautifully complex with a powerful stream of arpeggios, rocketing glissandos and giddying runs. The wind-up from the continuous stream of music only begins to wind-down somewhere in the second chorus of “Restless Farewell”, which melancholic melodic line soars in a gorgeous adieu to – might we hazard a guess – to fallen compatriots such as Roswell Rudd, which whom Mr. Saft became attached – as it were – at the hip after memorable musical encounters also captured by RareNoiseRecords.

Solo A Genova is also Mr. Saft at his finest. Its repertoire is full of glinting lights, mysterious depths, expectations, frustrations, hopes and doubts, like the shattered shadows of a sinister, quasi-Mendelssohnian scherzo glimpsed by moonlight in a forest. In sheer colour, variety, in the depth of its characterisation and the exceptional range and refinement of its pianism, Mr. Saft here imparts a power and towering stature to improvised music, which no amount of “bigness” (the usual route taken by so many pianists) can achieve. It’s an album to die for…