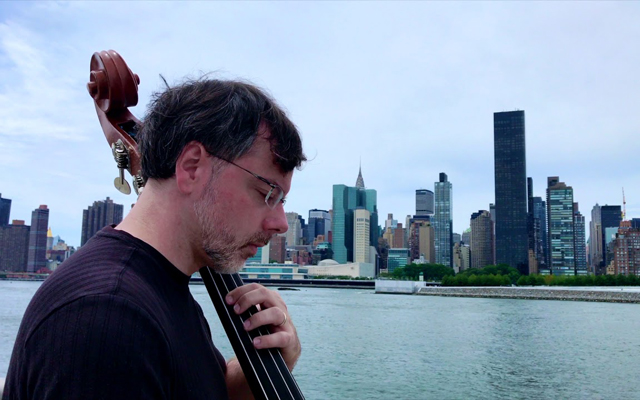 It was Ray Brown who accurately articulated (indeed “articulation” is what Mr. Brown did best) the role of the bass in Jazz when he said that no music – certainly Jazz – could exist without it. But he also warned that the bassist had to embrace two musical “things” completely or he had no business being in the band: he had to have “tone” and “style”. Whether he did so wittingly or not, Mark Wade has certainly taken these two aspects of his role to heart for on Moving Day (and all of his other recordings, really) one is immediately struck by his magnificent – even magisterial – tonal and colour, and his articulation is informed by a dark elegance that is easy to be seduced by. His notes are plump and after seemingly ricocheting in the cavernous bout fly out into the air around the listening room as if turning elegant balletic pirouettes before dropping like anchors into the rhythm of the piece.

This is only one aspect of Mr. Wade’s playing. He can also dig deep into emotional states of being and his harmonic reports from that inner being can be extremely tender, while still retaining their powerful muscularity. An extraordinary example of this is heard on “Something of a Romance”, especially on his molten solo in that piece. Colour plays a big part in Mr. Wade’s armoury and he uses his palette with erudite mastery. 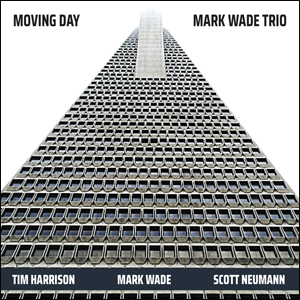 The music “In the Fading Rays of Sunlight” is a superb vehicle for Mr. Wade to display the full range of his immense capability to be both subtle and commanding as well. However, Mr. Wade does not come across as an omnipotent force in this trio.

His ability to melt into the ensemble is also quite evident in the manner in which he recedes from the spotlight frequently allowing pianist Tim Harrison and even drummer Scott Neumann to shine. Listening to “Midnight in the Cathedral” one gets a fine sense of this as the music unfolds and even though Mr. Wade plays a typically muscular solo early on in the piece, he leaves ample room for Mr. Harrison and Mr. Neumann – who is ever so delicate on cymbals – to reflect the proverbial stained-glass of the cathedral in their shimmering playing.

Mr. Wade also displays a sophisticated approach to composition and his work here played with buoyant, aristocratic grace and also deep and with just enough psychological ambiguity to maintain the intrigue and allure of their narratives. In this regard what he does with Joseph Kosma’s “Autumn Leaves” and also Dizzy Gillespie’s “Another Night in Tunisia” is almost insolently effortless, bringing his own voice and a debonair virtuosity and swagger to both pieces. All in all this is an album where an almost heroic world of bass styling is evoked while also sculpting the trio sound with enormous skill and telling effect.