Home Music James Brandon Lewis: “I have a need to be creative, and the...

James Brandon Lewis has a pressing need: “…to be creative…” The sentiment was similarly shared by Miles Davis and quoted probably after a photographic session with the great Val Kilmer: “I have to change,” Miles once said, “It’s like a curse…” Mr Lewis lives this too; but his art is also living proof of the two things that make him different from most musicians of his generation. First is that the fact that the continuum of Jazz is alive in him and second – and probably more a more significant fact – is that while like all tenor saxophonists he may speak the same language of Jazz, but unlike most – the truly special ones, like him, for instance – he does so in a voice that is singularly his own.

Moreover, Mr Lewis is a true virtuoso and he has achieved this, as an instrumentalist, in no small measure by sticking to one – and only one instrument [so far] – and that is the tenor saxophone. There are many examples of such fidelity among instrumentalists: Miles to the trumpet, Charlie Parker to the alto saxophone and – of course, to name some famous men on the tenor saxophone – Lester Young, Coleman Hawkins and Ben Webster. This fealty to the tenor horn has not only enabled him to explore the instrument’s register up and down and back to front, but to plumb its depths in a manner that enables him to form a highly personal and emotional relationship with his instrument.

For instance, the manner in which Mr Lewis marks his phrasing is uniquely songful, approaching phrases as one would if one were singing, often mimicking aria-like coloratura – for instance on “With Sorrow Lonnie” his take on Coltrane’s “Lonnie’s Lament” which he plays as if refracted in the shattered glass of a musical mirror. Mr Lewis’ ability to use soft dynamics that may begin with a pianissimo sigh before swelling upwards with a blast of expressive breath into a fulsome, raspy roar full of angst, or anger, or simply unfettered, visceral energy. There is, of course, much more in Mr Lewis’ playing that qualifies him to be recognised as an artist of the first order and these qualities may be listened to in awe, on two recent discs: 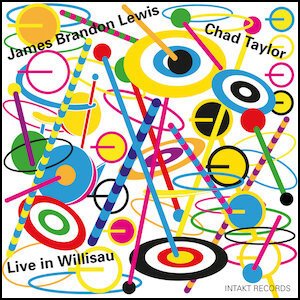 James Brandon Lewis | Chad Taylor: Live in Willisau Playing in front of the ferocious drums of Chad Taylor, the full extent of the tenor saxophonist are on display. Dispensing with any chordal instrument – such as the piano or guitar – Mr Lewis is free to charge up and down the register of the tenor saxophone to tell his stories in seemingly interminable vignettes, each of which is expressed in his inimitable big-boned style. He is, of course, accompanied along for the ride by the inimitable Chad Taylor, who with sizzling whispers of cymbals and the thunderous roar of the drum set, matches Mr Lewis’ brilliance on the tenor saxophone with hot musical isobars of his own in many-splendoured colours.

This live gig at one of the finest venues for improvised music – Willisau, in Switzerland – puts the naked genius of Mr Lewis’ musicianship under the arc-lights of a large stage. The saxophonist, for his part, returns the favour in kind laying it all on the line. HIS music is infused with his characteristically big tone built on larger than life notes and phrases and towering cadenzas that whip and curl inexorably from phrase to phrase and from one melodic variation to another. Whether he is paying homage to the ancestors [Duke Ellington on “Come Sunday” or Mal Waldron on “Watakushi No Sekai”], setting a standard [Harold Arlen’s “Over the Rainbow”] on fire or blazing is way through changes, one breathtaking improvisation after another [elsewhere through this set], Mr Lewis is unstoppable. 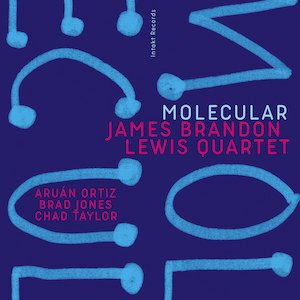 James Brandon Lewis Quartet: Molecular In a quartet setting, Mr Lewis’ forays into music on the tenor saxophone is no less imposing. He unpacks his music as if unveiling on gigantic melodic edifice after another as if with a view to creating an epic sonic landscape. But every now and then this musical visage reveals an architect who pauses to breathe in and express his feelings through each individual creation. Sometimes there seems to be a man driven by existential angst [on “An Anguish Departed”]; at other times we come face to face with an artist who pauses to ponder the significance of something beguiling [“A Lotus Speaks”], spectacularly mysterious [“Helix”] or even vexing [“Breaking Code”].

Through it all there is a sense that we are face to face with a mature artist who has an acute sense of his own history within the wider musical continuum. Clearly he has listened to everyone from Charlie Parker, Sonny Rollins and John Coltrane, to Albert Ayler, as well as to Joe Henderson and others; though not only to saxophonists, but also to iconoclasts such as Cecil Taylor and Anthony Braxton. From all of them Mr Lewis has gleaned the necessity of building an art of immense architectural beauty by employing improvisation with individual expression.And this he pours out into an art that is at thoughtful and meditative as well as one that is youthful and dances joyful, swinging abandon.

Unlike the live Willisau set, Mr Lewis is joined here by the incomparable Afro-Cuban pianist Aruán Ortiz who bangs the head of the saxophonist’s melodies with inventive and intensely emotive harmonic excursions that scale towering rhythmic walls of sound set up by the rumbling contrabasse of Brad Jones and the percussive colourations of Chad Taylor. An album to die for.