You think that by now it would be customary to expect excellence from every recording from the pen of Maria Schneider and yet she can always surprise you with more. This is what she now does with her astounding and prescient double album of music entitled Data Lords. Miss Schneider is the queen of politically conscious and artistically progressive composers; she is a composer who writes with the nerve endings of her very fingers rather than the graphite-end of a pencil. Her work – especially on this album – flows mightily with psychological nuance and [crucially] with emotional depth. On the repertoire she has combined all of the above [qualities] to create repertoire that puts a penetrating focus on music’s capacity to act as a sonic storytelling language, which has been created – surprise! – in a dialect quite apart from any other composer whose work we enjoy today. 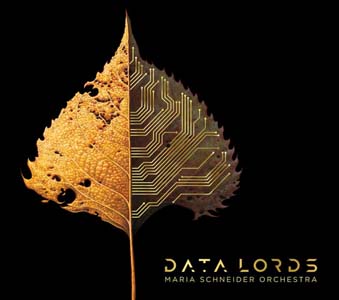 Long since an advocate for not only artistic expression but also the artist’s very right for ownership of his or her work, Miss Schneider has ploughed, ad hororem, a somewhat lonely furrow eschewing the use of virtually every label – both mainstream and independent. She has been in the vanguard of almost every movement to advocate in every public forum for artist-rights. And on Data Lords she takes on the biggest offenders of artistic humanity: the tyrannical machinations [and masters] of the digital realm which have all-but-succeeded in crushing creativity of the artistic community. She has drawn attention here to their unscrupulous practices and the insatiable greed of commerce. However, Miss Schneider has used the art of her orchestral music to fight these Data Lords, unlike the often rabidly comical verbiage used – often by artists themselves – on social media platforms; for example the most recent spate of ludicrous boasts by artists on the “number of plays” that their music has received on Spotify.

And so on this recording, Miss Schneider has presented the prospect of living in two opposing worlds: the digital one and the other which she presents as the preferred one; one that is not an Utopian one, but “Our Natural World”, which is – best of all – anchored in the realism and beauty of nature. The compositions – or “composition”, comprising several songs that have been strung together in the form of a sort of faux-suite – take us through the two worlds, which the composer has, to begin with, rather ingeniously differentiated with the use of subtly contrasting articles to qualify the adjectives and nouns of the individual disc subtitles viz: “The Digital World” [cold, impersonal, sinister] and “Our Natural World” [warm, beneficent, wholesome]. And she proceeds to match these titles by setting the perfect tone with music that follows…

The musical suite begins by inviting us into the portal to “The Digital World”. This begins with the orchestra that is soon usurped by the strains of phrases played by Ben Monder’s guitar; hypnotic and anguished low wails that are echoed by the ensemble and, soon, the groans of Rich Perry’s tenor saxophone. All of this builds up gradually in music of intense and beguiling hypnotic beauty with elemental foreboding on “A World Lost”. In our wandering together with the Maria Schneider Orchestra the musicians lead with their controlled cacophony through this sinister man-made “science-world” where we are forewarned, with “Don’t Be Evil”, which is both an imploration and a cautionary note of warning against a descent into the hell of our own making – with extraordinary soli by four instruments including one [the first of two actually] that features the eloquent pianism of Frank Kimbrough, who passed away tragically and suddenly not long after this performance was recorded.

Of course, not all the advances of this science-world are as sinister as this man-made world is cracked up to be. We find this in the music of “CQ CQ Is Anybody There?” and “Sputnik”. The former seems to paint a picture of desolation; a recollection of the lonely world of ham-radio operators speaking to each other across the clouds as Miss Schneider remembers fondly the experience of listening to that crackly chatter which her own father was once a part of. The latter chart reminds us of the race-to-space that followed the shot of the starting gun fired by the then Soviet empire with the spacecraft they named “Sputnik”, which put Yuri Gagarin in orbit above Planet Earth. This section of the suite culminates in the chart: “Data Lords”. It is a work created as an epic soundscape, with swirling agitated dissonance and harmony propelled it seems with a tottering, interminable and almost drunken rhythm. It is here that we are borne aloft, bound by an invisible elastic band stretched to the maximum before suddenly snapping as we fall to earth.

Disc two presents us with the prospect of the exact opposite of the torment of “The Digital World”. In keeping with its overall conception of this part of the suite “Our Natural World” lulls us with music that is awash with atmospheric equanimity. As always Miss Schneider leads us to places we might not have heard of or been to – in this case that place is Japan – in the chart “Sanzenin”. This title refers to a Buddhist temple in the Land of the Rising Sun. Our musical guided tour is driven by orchestral progressions seemingly dancing and prancing around the leaping, wheezing of Gary Versace’s accordion and continues seamlessly into – remaining in the Japanese landscape – a kind of leap-frogging jitterbug-waltz played out by Steve Wilson on soprano saxophone, quietly egged on by Mr Versace’s accordion and the rest of the cheerleading orchestra.

Miss Schneider’s eloquent suite continues, frolicking with characteristic childlike abandon on “Look Up”, a contemplation of the immensity of the universe above us. The title comes from Scott Robinson’s “I go out and look up at the sky every night”. Miss Schneider transforms the wonder of that act into music the sweeping wonder of which is echoed in soli by Marshall Gilkes’ appropriately bittersweet trombone solo and in the forlorn elegance of Mr Kimbrough’s piano. Wonder and awe continue to flow through “Braided Together”


that follows from music inspired by the first of two poems, “december 29/Windy and cold”, by the poet Ted Kooser. The penultimate movement of this work is entitled “Bluebird”, which is born of Miss Schneider’s other obsession – bird-watching. It is a fine piece full of swooping and soaring flights by Mr Wilson – this time on alto saxophone – and Mr Versace, who returns to regale us with another virtuosic performance. Appropriately, though Miss Schneider chooses to close with the second poem by Ted Kooser once again set alight with her spellbinding music entitled “The Sun Waited For Me”.

An important part of Miss Schneider’s music has always been the beauty of the packaging in which it is presented. Data Lords is no exception. This package comes with a booklet [to match the outer sleeve and inner slipcases for each disc] bound in sinister black covers, with the elegance of gold-trim, accompanied by exquisitely taken photographs of the recording session and the composer’s gracefully-written booklet-notes. None of this extravagance can ever take away from the superb music, captured in the warmth of a brilliant recording which is to absolutely die for.