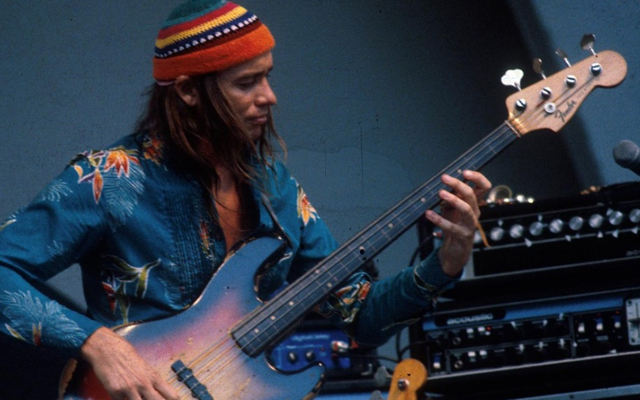 In an essay entitled Mingus Explains Song Titles the great Charles Mingus described his song “Gunslinging Bird” saying, “The subtitle was “If Charlie Parker was a gunslinger, there’d be a whole lot of dead copycats.” I was just feeling crazy and thought that if Bird was a gunslinger instead of a musician in those early days, there’d have been a lot of guys getting killed.” It’s easy to imagine how that killing would continue unabated even until today, including among its avenging angels a certain “Gunslinging Jaco” joined hands with the proverbial “Gunslinging Bird” to bring swift retribution to legions of dead copycats. To think that we’ve come this far in musical technique but not in original thinking is a little disheartening.

Nevertheless, it is always refreshing, if a little strange, to listen to the original. And it is not only to marvel at the remarkable at the technique with which Jaco Pastorius played the electric bass guitar and the treasure of innovative harmonics that he brought to the instrument. There is some grandstanding, of course; remember Mr Pastorius was, according to producer Robert Trujillo’s wonderful documentary film Jaco, “The greatest bass player in the world”. The fact that that Mr Pastorius is certainly one of the finest bass players of all time might have been borne out by his inclusion in the Down Beat magazine Hall of Fame, joining bassists Jimmy Blanton, Ray Brown, Ron Carter, Charles Mingus, Charlie Haden, and Milt Hinton. However, Oscar Pettiford and Scott LaFaro are not on that list, so… This does not have much bearing on the content of this exquisite 3-record package, however…

This Resonance Records package is entitled Truth, Liberty and Soul (Live in NYC The Complete 1982 NPR Jazz Alive Recording) and has “Truth” written all over the performance of Jaco Pastorius throughout the three records, in which Mr Pastorius’ vibrant music captures his great melodic rhythmic and – especially – his harmonic genius. But because it is a live recording, it must be compared – in terms of content – to other live recordings of this fabled Word of Mouth big band (named after the seminal large ensemble works captured on the eponymous 1981 disc); the other discs being The Birthday Concert (Warner Brothers, 1981, released in 19915), 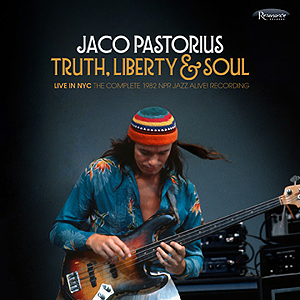 and Invitation (Warner Brothers, 1982) which contains music from the ambitious and now-infamous tour of Japan. How does Resonance package rate? Although reluctant to resort to anything celestial when listening to music, it bears mention that this package is well worth a million, perhaps even a trillion stars.

Jaco Pastorius’ near-mythical double-jointedness is on full and perfect display here and although there are glimpses of some grandstanding during the opening passages of “Invitation” and “Soul Intro/The Chicken” they soon dissolve into some of the most masterful displays of music to ever come out of the electric bass guitar. Mr Pastorius’ airy nimbleness is matched to the richness of sound which sometimes seems impossible from a group as large as 22 players – especially as this is a mix of those on acoustic instruments as well as electrically boosted ones. This is partly due to the dynamic range and balance – never too close – achieved originally in New York City’s Avery Fisher Hall by producer Timothy Owens with sound engineer Paul Blakemore and then repeated by Producer Zev Feldman and Executive Producers George Klabin and Dave Love. Again, using a box of magical tricks, Mr Klabin and Fran Gala worked miracles to keep the sound real and Bernie Grundman finished this perfect 3-record package off (especially on vinyl) with his legendary mastering touch.

The hero of the story is, however, Jaco Pastorius, who time and again lends credence to his own boast of being “the greatest…” with his superb playing. Still technique that is quite simply incredible, matched by passion and precision are one. The apogee – or more accurately “apogees” are on each and every side of the records. On LP One Side A, for instance, it’s “The Chicken”; Side B, “Donna Lee”, LP Two Side C it’s “Sophisticated Lady”; Side D (indubitably) “Okonkolé Y Trompa”; LP Three Side E “Reza/Giant Steps (medley) and Side F, the monstrously beautiful “Bass and Drum Improvisation”. Through it all, melodic lines are beautifully moulded; the return of the opening chords (in “Sophisticated Lady”) are brilliantly hushed, the climax in “Donna Lee” gorgeous and the dying fall of “Bass and Drum Improvisation” after all of the histrionics, is subtly atmospheric while as a bonus, the waltz “Bluesette” lilts with delicate ritenutos as its finale bounces. Having nominated all of those songs, however, it does come to pass that many other apexes do follow in other music as well.

I am not sure if there was evidence of the unpredictable – and completely forgivable – behavior on the part of Jaco Pastorius at this concert and if there was mercifully we are, as one would say, spared the blushes in a DVD. At any rate, the long and thin fingers and the double-jointed thumbs seem to be particularly athletic as Jaco Pastorius is extraordinarily spritely as he jumps and plays like a flibbertigibbet possessed, both on stage and across the vanishing frets of his bass guitar. Meanwhile the rest of the ensemble – especially Bob Mintzer, Randy Brecker, Othello Molineaux, Don Alias and Peter Erskine – do come up with the life-affirming performances. Naturally it is left to Resonance Records to pull out (the rest of) the stops; and, as usual, George Klabin, Zev Feldman and Fran Gala do not disappoint.