Jackson Potter has every right to be Restless. It’s hard to imagine a better debut record from any artist as young as this guitarist. What’s every more surprising is Mr Potter’s maturity judging by the five original compositions – including a breathtaking one “A Bird Flu”, with which the guitarist leaps out of the gate’; a work of contrafacts loosely based on Charlie Parker’s “Segment”. And then there are spectacular examples of jazz standards – “Falling Grace” by Steve Swallow and “Peace” by Horace Silver. All of this speaks to a debut that far from a blushing bud, is one that appears to unfurl in full bloom. 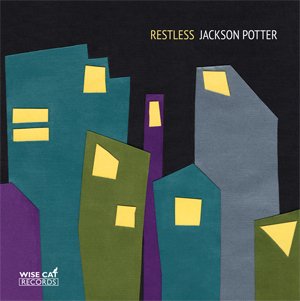 What is so winning is the natural, unforced flexibility of Mr Potter’s playing everywhere making it sound totally idiomatic. Like a full-fledged composer, the guitarist writes with intelligent [and frequent] changes of mood and tempo, and an unforced quality that makes his music so exquisite. In addition, the dynamic range of his playing is extreme, with its hushed pianissimos making one catch one’s breath before the high contrast of emphatic chordal writing, as at the very start, hits the ear hard and precise. Not only that, the dynamic shading of the melody [as in his balletic “Sophia’s Waltz” or Mr Silver’s “Peace”, for instance] which makes for soaring, most beautiful melodic, harmonic and rhythmic missives.

In slow movements of these pieces Mr Potter has few equals [especially in “Peace”] where his playing is heavenly, hushed and intense. But the guitarist is also unafraid to burst out of and pour on the liquid fire as he does on the song “Restless”. His musical partners here are fully in tune with his artistry and have interiorised his work bringing their very own idiomatic interpretations of these works. Their integration into the music is flawless. An original and utterly memorable record and all congratulations to Mr Potter as well as to the musicians who’ve joined him on this adventure.