David Larsen is better-known in the Pacific Northwest as a composer and pedagogue than as a baritone saxophonist albeit the fact that just this year [2021] he released an impressive tribute to a mentor, Gerry Mulligan. That’s a clue – to those who haven’t yet heard Mr Larsen – that he is a low winds specialist. It’s not the easiest or horns to play, requiring not simply technical skills, but it’s also a hard horn to express music with the same liquid elegance that may be possible with horns in the higher register. But Mr Larsen plays the baritone saxophone – and the tenor horn to boot – with uncommon skill and eloquence. 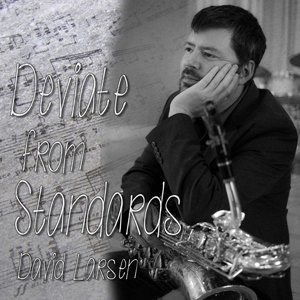 Mr Larsen’s stentorian breathing gives his musicianship on both horns a rumbling gravitas. He is an instrumentalist of superior musical and technical gifts who allows his personality to sing through the music with taste and intelligence. The title of this album – Deviate from Standards – may be a tad misleading because what Mr Larsen does in this music is replicate tired repertoire with compositions mirroring the classic style of standards, made in that image, but in his own voice. And in this recital he celebrates blessedly old-fashioned freedom and intensity with a new sense of abandon; something that ought to be appropriately acknowledged as much of the new music is so formulaic and eminently forgettable. Composition is, after all, what Mr Larsen does best.

But hold on a minute… Mr Larsen can also swing. You only have to listen to “He Who Getz the Last Laugh” to experience this in the pink, so to speak. In his hands the big horn is played with eloquent pliancy such that it might seem to be light and airy. On “Augmented Reality” Mr Larsen is joined by the incomparable Ken Peplowski, one of the finest clarinetists – a true descendent of the great Artie Shaw – yet it is a song on which the baritone saxophonist holds his own. Here as elsewhere Mr Larsen’s playing is enviably sensitive and inventive, making it hardly surprising that he has little time for the many note-perfect but ultimately sterile competition-groomed performances of today.