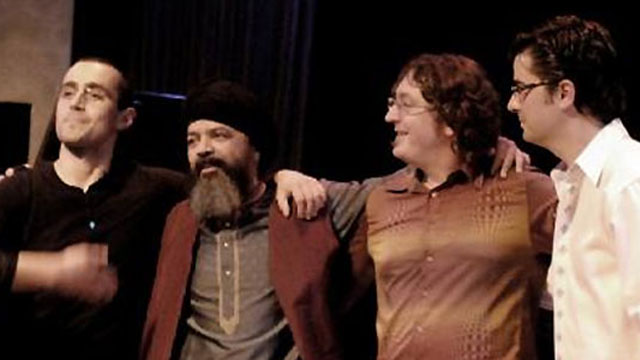 At first blush, to the uninitiated, Hristo Vitchev may give the impression that he sounds like that other great guitarist and master of harmonic colours—Pat Metheny. But upon closer listening, it is possible to discern the difference. Mr. Metheny’s notes are light, airy and almost always played in lines that leap almost vertically from one plane to another, whereupon the guitarist continues on that bright, expansive linear path to another plane. Mr. Vitchev, on the other hand, plays in notes that are seem denser and which follow one another in an elliptical fashion. Clusters of notes thus moving rapidly one after another, move forward in narrow and wide arcs forming whorls as they rush and foam and beat upon the heart. Mr. Metheny’s touch is like that of the feather on that cerebral part of the body and in the soul’s intellect. Mr. Vitchev’s is basal and harkens to the depths of the heart and that part of the soul that contains the spirit. Both guitarists are deep and play with much magic, but Mr. Vitchev seems to use oils to paint his musical canvases, while Mr. Metheny does water colours. 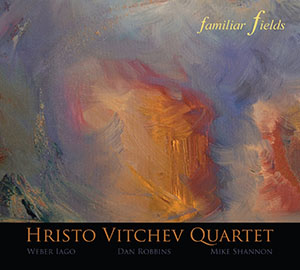 On his album, Familiar Fields Mr. Vitchev is anything but familiar. Fat and fulsome notes fill the sustained narrative of his songs. Once again, Mr. Vitchev tells a story of a long expedition undertaken by the musicians seemingly in a ship on a viscous sea. The guitarist is like both Odysseus as well as Homer, making the adventure as well as recording it in an epic manner. And like his epic characters Mr. Vitchev encounters classical and mythical beings, with who he has dialogues that carry on forever. For most of his expeditions, the other one in the dramatis personae is the Brazilian pianist, Weber Iago. And in the classical play of Mr. Vitchev’s making Mr. Iago is a fallen hero, a mortally wounded hero, Agamemnon, a sheaf of wheat and many other beings played with robust and cathartic genius.

The suggestion, then, is that Mr. Vitchev brings a deep and enduring European sensibility to his music. In North America this becomes a dialogue about whether the music incorporates the dialect of jazz. It does not necessarily have to be so. To the extent that all music is ultimately the expression of the artist’s heart Mr. Vitchev makes this point, albeit subconsciously. There is also the small matter that Jazz, an evolution of the blues is almost always based on 32-bars and is de rigueur about the triumph of the human spirit over great adversary; but so was the 9th Symphony of Beethoven. The point is contemporary music does not always have to be about whether it is jazz to be elastic, innovative creative and played in the strictures that have been put in place by a few narrow-minded musicians.

And so the songs in Hristo Vitchev’s cycle that pass through the Familiar Fields of life as on the record, are all about recapturing that spirit of adventure and about profound questions and situations. So the music between “Ballad of the Fallen” and “Willing to Live” is all about whether there is any meaning in the decorative elements of music with reference to things like harmony and rhythm. In the hands of someone else this might sound flaky, but in the fingering of Mr. Vitchev, there are musings of the soul in the gliding of his plectrum or his thumb from one note to the next; from one chord to the next. And in the end the guitarist triumphs whether it is in the story he tells; or in the colours he paints his musical canvas with; or in the demanding creativity that he brings to the literature of the guitar in the language of music.